Result For The First World Title Fight in Greece’s History: 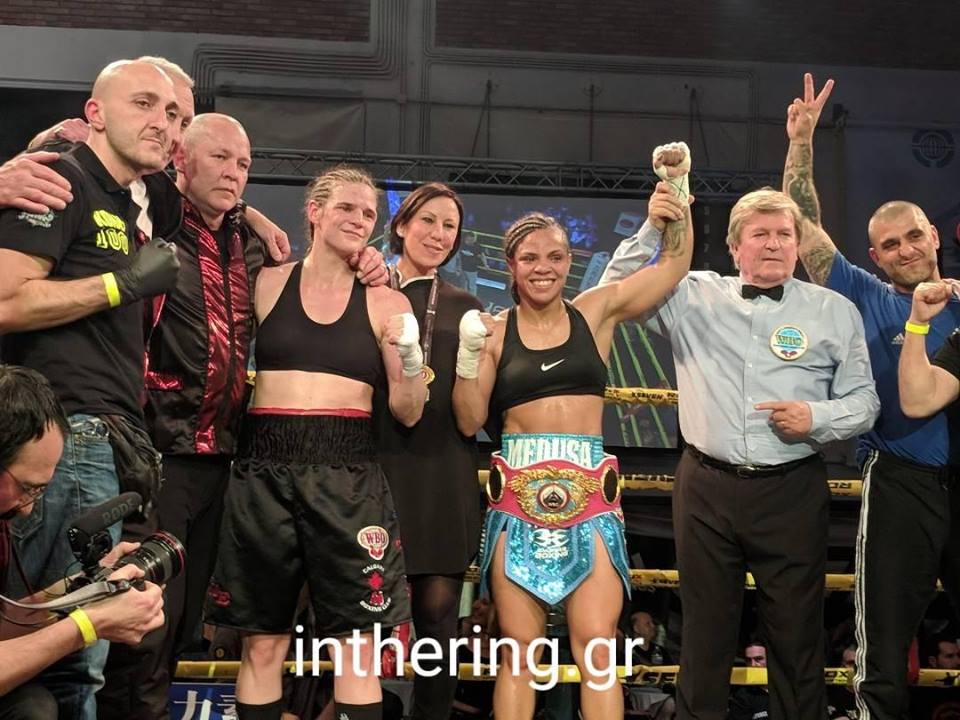 Linardatou won via TKO in the sixth round after three consecutive knockdowns that had Wyatt streaming blood out of her face.

It was a bummer way for the Canadian to end the fight, after she controlled much the goings in the first few rounds and also suffered the first defeat of her professional career, leaving her with a record of 8-1.

Wyatt was hot out of the gate early — much to the delight of the fans at the Gods of War XII show in Greece — and unleashed flurry after flurry of punches to Linardatou that seemed to overwhelm the veteran Greek fighter early on.

There were numerous points during the first three rounds when Linardatou went for a clinch or tried to pull Wyatt towards the ropes in hope of looking for a clean break.

At second glance, however, perhaps it was just in effort to size up her opponent, who didn’t seem intent on trading in her aggression level for a more strategic approach as the fight went on. Linardatou started to reel in her own punch-count while picking her spots when openings presented themselves.The result of this was multiple tags that caught Wyatt through her remarkable offensive attempt.

Then some massive hooks.

It was then that the fight started to turn in the favour of the hometown fighter, who had seemingly found a working tactic against the fist-flying Canadian. The Athens native sat back, absorbed a barrage of punches while protecting herself and slowly picked apart Wyatt through small cracks in her armour.

It wasn’t long after that that the finish of the fight came barrelling down on Wyatt, who was sent to the mat in Round 6 after a brutal looking hook.

She got up, red liquid pouring from her nose, and was subsequently knocked down twice more to give Linardatou the TKO win.Afterward, the two fighters embraced and the two camps (everyone involved in both) stood together in the middle of the ring for a group photo.