Resolution of The World Championship Committee: Burgos request for direct rematch with Martinez 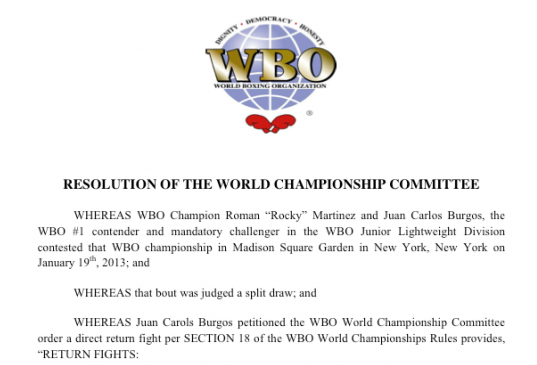 RESOLUTION OF THE WORLD CHAMPIONSHIP COMMITTEE

WHEREAS that bout was judged a split draw; and

WHEREAS all interested WBO Participants were given notice of this Petition and given the opportunity to submit any information, documents or argument that they believed would help the Committee resolve this Petition ; and

NOW THEREFORE IT IS RESOLVED by the WBO World Championship Committee that it believes that the decision in the WBO Junior Lightweight Division contested in Madison Square Garden in New York, New York on January 19th, 2013 was not substantially irregular or a clear misapplication of the rules of boxing resulting in a manifest unfairness; and

IT THEREFORE RESOLVES that this Committee does not recommend the WBO Executive Committee determine per SECTION 18 of the WBO World Championship Rules that there be a direct return fight. |Burgos|martinez|rematch|request|Resolution of The World Championship Committe