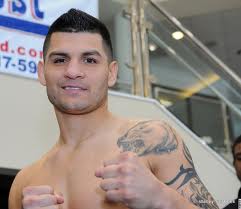 On Friday night March 29, Arthur Pelullo, Banner Promotions and Greg Cohen Promotions will present ESPN  Friday Night Fights featuring the NABO Middleweight champion Brian Vera.  Vera will take on upstart Russian Donatas Bondorovas in the twelve round bout that will headline a night of boxing at the Turning Stone Resort Casino in Verona, New York that will be broadcast live as part of ESPN 2 Friday Night Fights.

Vera started of 2013 with a bang as he stopped former world Jr. Middleweight champion Sergiy Dzinziruk in ten rounds at the Turning Stone Resort Casino on January 25th.

In that bout, Vera dropped Dzinziruk twice in round one and once in the tenth to retain his NABO Middleweight title.

The thirty-one year old has some great wins over the likes of Samuel Miller (17-1); Max Alexander (14-1-1); Vera put the first loss on future world title challenger Andy Lee. Vera also has wins over Sebastien DeMers (31-2) and two victories over former world champion Sergio Mora with the latter coming in his last bout on August 11th.

Bondorovas of Chicago via Kaunas, Lithuania has a record of 17-3-1 with 6 knockouts.

Junior of San Paulo, Brazil is undefeated with a record of 14-0 with 12 knockouts.  The twenty-seven year old Junior has a 1st round knockout over undefeated Marcus de Oliveira (15-0-1) as well as a 9th round stoppage over undefeated Pedro Otas (23-0) to capture the Brazilian Light Heavyweight title.  He captured the WBO Latino title with a 6th round stoppage over Jose Alberto Clavero (37-9-1).  In his last bout, Junior made an explosive American debut when he stopped former U.S. Olympian Dante Craig in one round on January 25th at the Turning Stone Casino Resort.

Savigne of Miami, Florida via Cuba has a record of 10-1 with 7 knockouts.  He is on an eight bout winning streak which includes a 6th round stoppage over former three-time world title challenger Richard Hall for which Hall captured the WBA Fedlatin & WBC Fecarbox Light Heavight championship.  In his last bout, Savigne scored a ten round unanimous decision over Dhafir Smith on November 30th, 2012.

Doors open at 6:30 p.m. with the first undercard bout starting at 7:30 p.m. The Friday Night Fights telecast begins at 9 p.m on ESPN , ESPN Deportes and will be available online through WatchESPN.com and on smartphones and tablets via the WatchESPN app.