Garcia: Pacquiao One of The Best, Pound For Pound 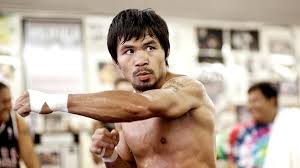 2012 “Trainer of the Year” Robert Garcia believes that “Fighter of the Decade” Manny Pacquiao is a top pounf for pound fighter besides being a great human being.

Before taking a return flight to the US Garcia said “Brandon is tough and gave him all he could handle but Manny is very smart, very quick, good footwork. He was in great shape.”

Garcia said Pacquiao was “in one of the best shapes of his career. He fought good and I’m sure he trained hard.”

He conceded that they “thought wrong that after the knockout and at 35 he can’t be as fast as he was four or five years ago but he was as fast or even faster.”

Asked on whether Pacquiao was one of the best pound for pound, Garcia replied “yes he is. Yes he is.”

Garcia reiterated what he had said about Pacquiao many times before – “he is a good person.”