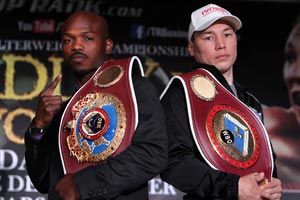 Only three days to go until the welterweight showdown between WBO welterweight champion Timothy “Desert Storm” Bradley Jr. (29-0, 12 KOs) of Palm Springs, California and Russia’s Ruslan Provodnikov (22-1, 15 KOs). The two fighters met Wednesday afternoon for the final press conference at the Conga Room at LA Live in Downtown Los Angeles. They will square off Saturday night at the Home Depot Center.

“Ruslan exemplifies what boxing is about Tim Bradley is pound for pound an elite fighter. This is what makes the fight,” Top Rank President Todd duBoef said opening the festivities.

Bradley’s trainer Joel Diaz then spoke about his fighter and their preparation. “We are back. Everything has been said since they announced the fight. We are here to show what we worked for. Tim Bradley prepares himself really well for every fight. He makes my job very easy. I thank him and his family for believing in me. I want to thank Ruslan for coming into the picture when we didn’t have an opponent he stepped in. He is a strong fighter. We prepare for every fight really well. Saturday will be a great fight. You will see a different Tim Bradley.”

Shortly after it was the fighters turn to speak as they are ready for Saturday night. First to come up was the Russian fighter introduced by his promoter Artie Pellulo of Banner Promotions.

“I don’t want to say too much. During training for this fight a lot has been said already. I am ready for Saturday,” Provodnikov said in Russian.

Then it was time for the champ to speak.

“Ruslan Provodnikov is a tough opponent. A lot of you are saying ‘aaaah he’s tough but he’s not well known, yadayada.’ It’s a tough challenge I’m facing Saturday night. I trained like no other. This has been one of my best camps. This camp was actually better than the Pacquiao camp. I feel strong, I feel fast, I feel like I’m ready to take on anybody,” Bradley said.

Bradley acknowledged his promoter, Hall of Famer Bob Arum. “What up Bob? How are you doing? I haven’t seen you in a while, where you have been?

“It will be an exciting night. This is going to be a fight to remember. Toe-to-toe, however long it lasts, I’m gonna get the job done. That’s what I do. I win. That’s one thing you can always write about me: This kid can fight and he can win. So that’s a good thing you can write about. Other than that I will see you at the fight it will be an explosive night,” Bradley concluded.

Fightnews.com spoke to both fighters after the press conference ended.

Ruslan Provodnikov: “Some people are saying that he will punch much harder. We will see March 16 how hard he will punch. I am happy and ready for the fight. Training went well. There will be people flying in from Russia and locals coming to the fight. Like always, you will see a great show from me because that’s what they expect from me. I always think of my fans and make sure they get an exciting fight.”

Timothy Bradley: “It’s my first fight back from the Pacquiao fight and time to silence some critics. You just watch. You will hear those shots from ringside that are solid and hard. Everyone will be saying ‘ooh, aah’ all night. I promise you will have fun watching me.”