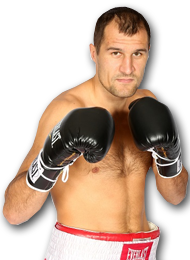 Sergey Kovalev (born on April 2, 1983) is a Russian professional boxer from Chelyabinsk, Russia but based in Florida. He is the current light heavyweight WBO champion and is known for his devastating punching power. He is signed with Main Events and trained by John David Jackson.

Kovalev started his career with a first round TKO of Daniel Chavez at the Greenboro Coliseum in Greensboro, North Carolina.   He has since gone on to record 21 wins (19 by KO) with one fight ending in a draw as a result of a technical decision.   On 17th August 2013 he fought Nathan Cleverly for the WBO light heavyweight title, winning by 4th round TKO.