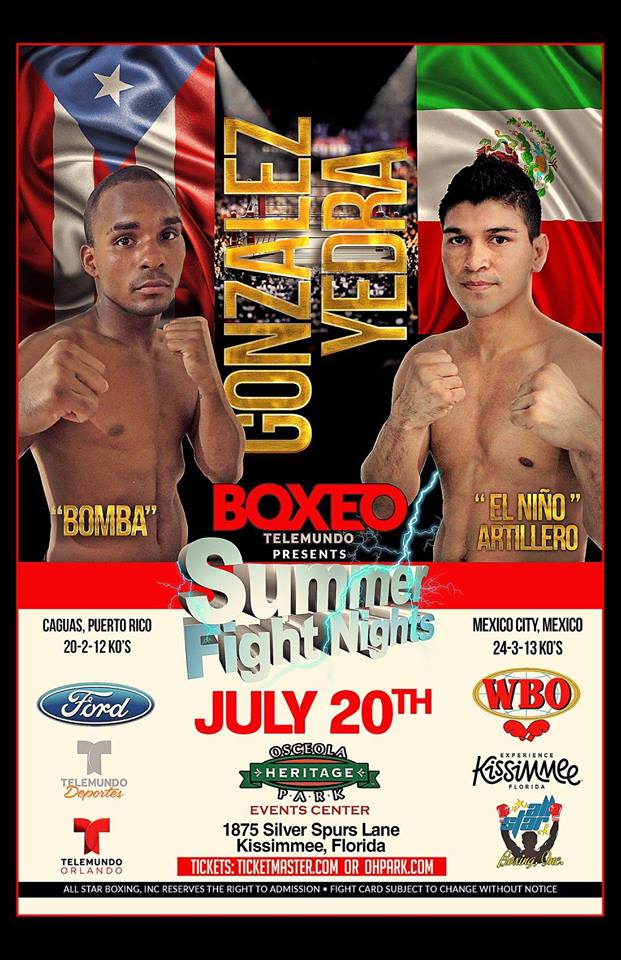 The Boxeo TELEMUNDO summer series opens with another chapter of the famed Puerto Rico vs Mexico boxing rivalry. Former amateur standout and WBO/NABO flyweight titleholder Jonathan “Bomba” Gonzalez (20-2-1, 12 KOs) of Caguas, Puerto Rico will take on former world title challenger Julian “El Niño Artillero” Yedra (24-3, 13 KOs) of Mexico. The 10 round main event will take place at the Osceola Heritage Park Events Center in Kissimmee, Florida. The World Boxing Organisation Latino Flyweight Title will be on the line. The promoter of the event is Tuto Zabala Jr. of All Star Boxing, Inc.

Bomba Gonzalez made his Telemundo debut this past February at this same exact venue when he got his career back on track with an impressive victory over former world title challenger Ricardo Rodriguez. The local crowd, like in his last fight, will be packed with his countrymen supporting him.

How have you prepared for this now the biggest fight of your career?

This training camp was much tougher than prior ones. I prepared for 10 weeks. My fights from here on out will be against opponents competing on the championship level.

I have seen some videos of him. He has my respect for sure and has a lot of experience. He has competed on the international level and fought for a world title.

Do you feel it is an advantage for you that he is moving up in weight?

This is an advantage for me physically but we have prepared as if that he will be as strong as I will. I cannot be overconfident at all and I won’t be.

How has your profile changed coming off of your last victory?

I surprised some people the last time out. Many thought my career was over. I had other plans with more to come. I have received a lot of congratulations following the fight.

Where did you get your nickname (the bomb) from?

It comes from many years back when I fought in Cuba as an amateur. A trainer there said they way I was throwing punches looked like was throwing bombs and the name stuck.

What kind of fight should fans expect Friday night?

I can tell you that I am coming to fight with my plan of intelligence round by round. If the knockout presents itself I will take it. If not a clear decision win is just as good. He on the other will be very aggressive and fighting with equal hunger as I. He is coming with the intent take my place in the world rankings. It is up to me to prevent that.

Do you feel you would be ready for a world title fight following a victory on Friday?

I have really matured at this stage of my career. I know I have a tough fight ahead of me but I am up for the challenge.