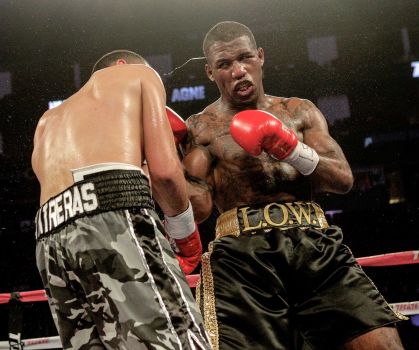 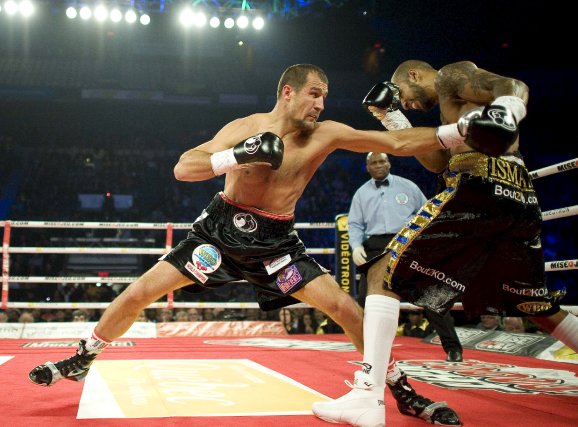 On February 13, Main Events hosted a teleconference for its March 29 light heavyweight showdown in Atlantic City between WBO champion Sergey “Krusher” Kovalev (23-0-1, 21 KOs) and top-rated but relatively unknown Cedric “L.O.W.” Agnew (26-0, 13 KOs). The bout will be televised on HBO and is the first bout at the Boardwalk Hall for Main Events since Arturo Gatti took on Alfonso Gomez in 2007 in Gatti’s final bout. Here are the highlights from the teleconference:

“I have only one big wish, and that is to win this next fight, and I have a main goal to win one more title this year.

“The public and the fans and everybody want this fight (Stevenson-Kovalev). Everybody pushes him, and this year will be this fight.”

“This fight (with Agnew) is dangerous for me too, and who will win we will see. I’m going to the ring to win.”

“All my focus is to win and then win my next title to get better and fight Stevenson.”

“It’s not my fault that my opponents all get knocked out.”

“I love to spend time with my family and friends.”

“I prepare (for Kovalev) the way I’ve been preparing. Training hard, taking things one day at a time, hard sparring and hard work with my trainer, but I take no fight lightly, and I don’t care who I’m fighting.”

“A fight with Sergey Kovalev is a great fight for us, and we wouldn’t have taken the fight if we didn’t think we could win the fight. With that being said, I don’t look at him as no terminator or nothing. He’s a human just like I am. He can be hurt just like anybody else can be hurt. Come March 29 we’ll see what’s gonna happen.”

“Well, to me it doesn’t matter how many fighters I went the distance with or how many I stopped. Everybody knows that styles make fights, and I believe, I mean I know I have the style to defeat Sergey Kovalev or anybody else they put in front of me.”

“Like I say, I’m gonna go out there and do what I’ve been doing for years. I don’t look at it as there being pressure from back home because my hometown is gonna stand behind me regardless. On fight night, I’m ready to take care of business.”

“In that fight with Yusaf Mack I just did what I needed to do to win the fight.”

“I don’t see nothing spectacular coming from this guy. My personal opinion I just think he’s ordinary.”

“The bigger names take time to make, and that fight (Stevenson) will get made, but our goal is for Sergey to stay active and Sergey’s goal is to stay active. This is the fight we found. This young man is willing to step up and test his skills, and that’s what this sport is all about. I remember people talking a long, long time ago when Mike Tyson was fighting Buster Douglass when we were trying to make the Tyson-Holyfield fight and you know what happened then, so I never ever discount anyone’s chances of winning a fight and nobody ever should.”

“From what we know, Cedric is a boxer and he is undefeated so he doesn’t know what it feels like to lose.”

“I think no matter what, we’ll see a sensational performance from Sergey Kovalev. Like I said, nobody gave that guy against Mike Tyson much of a chance. There’s no such thing as a sure thing. It’s easy for someone to lose focus when there’s talk of other big fights, and there’s millions of examples of people who have lost focus and walked into something that they didn’t expect. I think Sergey is a great fighter and think he can beat everybody in the world, but I’ve been at this long enough to know that you have to take everybody seriously.”

“As a promoter, I can’t come out and say that I think the outcome is preordained because I don’t think any outcome is.”

“The real challenge aside from Cedric Agnew is not to get distracted by fights that are out there of potentially happening. I mean there’s been more questions on this phone call about Adonis Stevenson than there have been about Cedric Agnew.”

“A fight between Sergey and Andre Ward is certainly something that is gonna happen someday, but it’s not going to happen at 168.”

“When you start out (looking for opponents), you have to look at the top fifteen. You have to see who’s available and then discuss with HBO. Fonfara is someone that HBO would approve but he moved on. Cedric was also on that very short list of people that HBO asked us to approach first, and once we knew that Fonfara wasn’t going to work out, we approached Malcom.”

“He’s American; he’s undefeated; the fight’s in the United States and Sergey’s last two opponents have not been American so it made all the sense in the world.”

“Number one, we’re glad that a lot of people are gonna underestimate Cedric Agnew. Cedric Agnew is a very skilled fighter. This is a fight that Agnew is chomping at the bit for. He thinks he’s ready for this fight. We think he’s ready for this fight. He was a good amateur, but had some hand problems in the amateurs, so he wasn’t able to do what he wanted to do; however, he’s been flying a bit under the radar, which may not always be the worst thing. He plans on upsetting, and I believe we got a fight here, gentlemen.”

“Cedric would rather have fought Kovalev (than the IBF eliminator). Style-wise we like Kovalev’s style for Cedric.”

“I know everybody wants to see Kovalev and Stevenson. I’d like to see the fight my self. We’d all sit down and watch it, and I’m sure HBO will buy it later this year; however, they’re just going to have to do it without the WBO title.”

“Sergey Kovalev is must see television, and someone you have to watch.”

“The biggest point that everybody has to realize is that Cedric Agnew wants to fight Kovalev. This is a fight that they’ve been asking for. There’s not many guys out there from doing the matchmaking that want to fight Kovalev. ”

“Sergey’s become an all-around fighter. He’s going to the body a lot more. He’s placing his punches a lot better, and he’s not rushing his shots like he once did.”

“He (Sergey) has boxing skills, but we haven’t seen those because most guys don’t go past four rounds, so maybe in the future we’ll get a chance to see him display his boxing abilities.”

“He’s not just one-dimensional, and that’s what a lot of fighters don’t realize. They hear he’s a “Krusher” or “Terminator” and they think he’s just one-dimensional. Sergey has a lot of tools to work with. I’m hoping in this fight here that maybe Cedric will make Sergey show people what he can do and Sergey can showcase his talents.”

“It’s an intriguing fight, and we’re not taking this kid lightly. Sergey takes no opponent lightly. When we’re in the gym training, every fighter is the most important person on the planet at that moment.”

“I’m in the same boat you’re in, but we’ll get films on him in the next week or so and then we’ll dissect him and see what he is.”

“Once he became champion, he became the hunted. He’s no longer the hunter. This kid stepped up, so that means he’s hungry.”

“Our sole focus is Cedric Agnew.”

Cedric’s been fighting since he was eight, and he’s got a bunch of amateur fights and knows how to fight. We’ve been begging for exposure and now we’re getting it. He’s gonna be ready; he always is.”

“Since he’s been down here in the last four years, he’s maybe taken ten days out of the gym. He’s a gym rat, and he’s ready.”