Afolabi Has Made Many Adjustments For Huck Trilogy 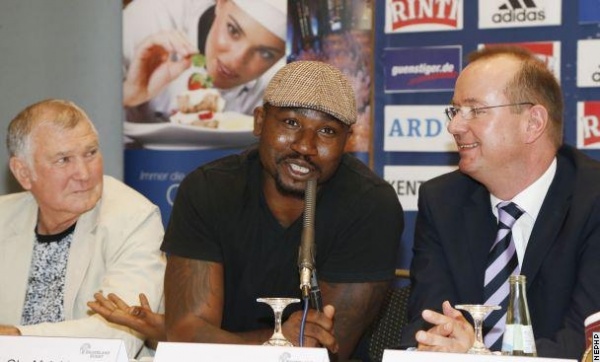 Ola Afolabi has come up short in each of his two attempts at wresting the cruiserweight crown from Marco Huck. The British cruiserweight hopes the third time is a charm when the pair meet once again on June 8 in Germany.

Their rematch last May ended in a draw, also serving as Afolabi’s last ring appearance as he has been out of the ring for more than a year. The tie verdict was debatable but generally viewed as a fairer outcome than was the case in his disputed points loss to Huck in Dec. ’09.

“It was extremely tough,” Afolabi (19-2-4, 9KO) admits of his efforts to live with the outcome of last year’s bout. “Towards the end of (the fight), I lost my focus. That allowed (Huck) to get back into the bout. My mental preparation ahead of the fight was not ideal and that took its toll back then.”

Not leaving anything to chance for their third fight, Afolabi decided to make changes in his training camp. The 33-year old trained in Big Bear with noted trainer Abel Sanchez, the first time in his career he has spent significant time preparing in the California location wildly popular in boxing circles. He has since shifted camp back to Germany to properly acclimate for next weekend’s showdown.

“[Training] has been really good,” Afolabi said of his preparation for next weekend’s title challenge. “I have started my preparations back in November of last year. I went to Big Bear in California to work on my conditioning, which I have also been working on while we were staying in Zinnowitz, Germany. If I compare my current fitness level to previous camps, it is a difference of day and night.”

Ring rust is a concern, though not as much as his admission of having spent the better part of the past six months in the gym preparing for this fight.

However, Afolabi insists that burnout is of no concern and that the workouts have been properly spaced out.

“No, there is no danger whatsoever,” Afolabi insists. “I have mostly been working on my conditioning by running a lot as well as on my mental strength. Sparring only started a few weeks ago. I will be at my best when I step into the ring come June 8

“A big difference is that I have changed my diet. I am eating properly and take vitamin supplements. I quit eating Cheeseburgers and other junk food and have turned to healthy food instead. It makes a huge difference. I could make the weight for the fight right now. So by not having to make weight I can concentrate on my training and keep my focus.”

Afolabi’s workouts have been well documented in the media, a development that played out by design.

“I am very proud of myself and the way the preparation has been going so far. I want my fans to know, that I am not just talking but backing it up. It also keeps me motivated when the supporters give me a positive feedback.  Moreover, I am only posting photos of my progress.

“I do not talk about my sparring and I do not go into detail. All it does is that it should motivate Huck. He knows that I am ready. So he better be ready himself.”

The trilogy with Huck (35-2-1, 25KO) marks the London-born Afolabi’s ninth consecutive appearance in Europe after having spent the first six years of his career in the United States. Their first fight back in 2009 served as Huck’s very first title defense.