Bernard Hopkins on Being Inducted To Atlantic City HOF 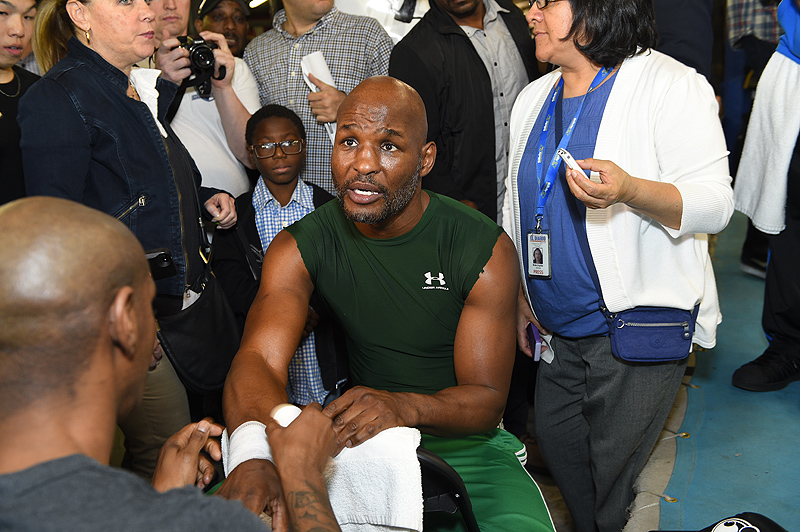 ATLANTIC CITY, N.J. – Golden Boy is proud to announce that the 10-round middleweight battle between D’Mitrius “Big Meech” Ballard (20-0, 13 KOs) and Elias “Latin Kid” Espadas (18-4, 13 KOs) will kick off the Atlantic City Boxing Hall of Fame Weekend. The fights will take place on Thursday, June 20 at Ocean Casino Resort/Ovation Hall in Atlantic City, N.J. The event will be streamed live globally on Facebook Watch via the Golden Boy Fight Night Page.

Golden Boy is also excited to announce that Business Partner Bernard “The Alien” Hopkins will be inducted into the 2019 Atlantic City Boxing Hall of Fame. The ACBHOF is dedicated to preserving the rich boxing history of Atlantic City through live historical curation, exhibits, legendary boxing stars, and personality appearances. Hopkins is a legendary figure who fought in Atlantic City an astounding 19 times, and he will be in appearance for the entire weekend as the city honors his historic trajectory.

“I’m grateful for the honor of being inducted in the Hall of Fame in a city where I had my first professional fight,” said former WBO Champion Bernard Hopkins. “I fought against a guy named Clinton Mitchell, who was an outstanding Golden Gloves prospect at the time. I lost by decision, but I learned a lesson that night. I learned something. If you look at my record, you’ll see that I left the sport for almost two years. Most people would not have come back from that. Most people don’t want to fail, so they don’t try. As far as I’m concerned, I didn’t have a choice. I told myself, ‘Either I make it in this boxing business, or I’m going to die.’ That night at Atlantic City, where I later fought many more times, changed everything. I am profoundly grateful to be in this position, to be inducted in the Hall of Fame of a city where this journey started.”

“Every year the Induction Weekend Celebration gets more exciting,” said Ray McCLine, President and Founder of the Atlantic City Boxing Hall of Fame. “Again, we have an excellent class of inductees who have made major contributions in making Atlantic City a top boxing destination around the world. I wish to thank Roxanne Passarella CEO of FantaSea and 2019 Honoree Bernard Hopkins who both played a major role in bringing this exciting event together with Golden Boy and Ocean Casino Resort.”