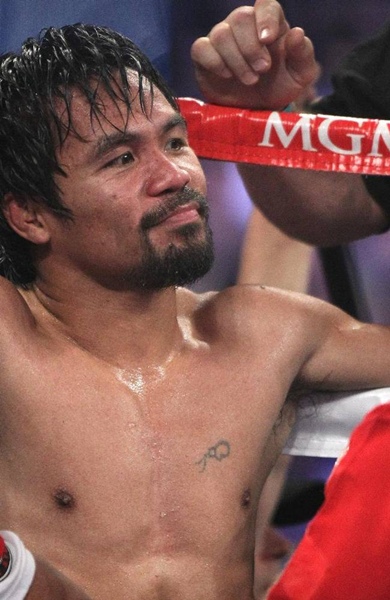 Sok Biruar, a Moro Islamic Liberation Front sub-commander, joined with soldiers from the army’s 6th Infantry Division in the Philippines’ Muslim south to watch Pacquiao avenge his 2012 loss in a unanimous 12-round decision. All around the country, life came to a halt as the fight was broadcast live from Las Vegas, Nevada, in gymnasiums, malls, restaurants, public parks, malls, and main squares.

Pacquiao – or the Pacman, as his legions of fans like to call him – is without doubt the most famous citizen in the Philippines. He grew up in a slum without shoes, and had sold donuts, flowers and fish on the street until an IBF Super Bantamweight title fight in 2001 propelled him to the big time.

Since then he has won 56 fights – ten of them world titles at four different weight classes – drawn five and lost two, earning close to $US700 million in career TV revenue in the process. He became a Congressman and dabbled in singing, politics, acting and cockfighting, before losing his title to Bradley in a split-decision in 2012. Most ringside observers were astonished, judging Pacquiao to have won the fight.

In Zamboanga City, refugees displaced when rival Muslim faction the Moro National Liberation Front (MNLF) laid siege to the city in September to try and derail the peace talks were also jubilant Sunday, breaking into thunderous applause and chanting “Manny! Mannny!” as Pacquiao’s victory was broadcast on giant screens set up among the tents and temporary housing.

More than 100,000 people forced to flee their homes in the ensuing three weeks of fierce fighting are still housed in the city’s Joaquin F. Enriquez Memorial sports complex. Some 200 people were killed in the siege, including soldiers, rebels and civilians.

“We’re so very, very happy… for this moment we are able to forget our problems,” said Kadaf, 26, whose family’s bunkhouse in Barangay Rio Hondo was destroyed during the 23-day standoff between the government forces and the MNLF.

“At least our idol has now proven to the whole world that he is still the king of boxing,” he added.

President Benigno Aquino’s spokesman Herminio Coloma said in a statement Sunday that the nation is united in cheering on Congressman Pacquiao.

“He is the symbol of the excellence of the Filipino in all endeavors,” Coloma added. “Pacquiao’s latest victory is symbolic of the way Filipinos can recover from the worst disasters,” refering to the siege in Zamboanga, Typhoon Yolanda and the Bohol earthquake that struck the country last year, killing thousands.

Pacquiao’s mantra for Sunday’s fight was “my journey will continue.”

He has said he is 80 percent sure he will run for senate in the Philippines in 2016 when his term as a congressman expires.