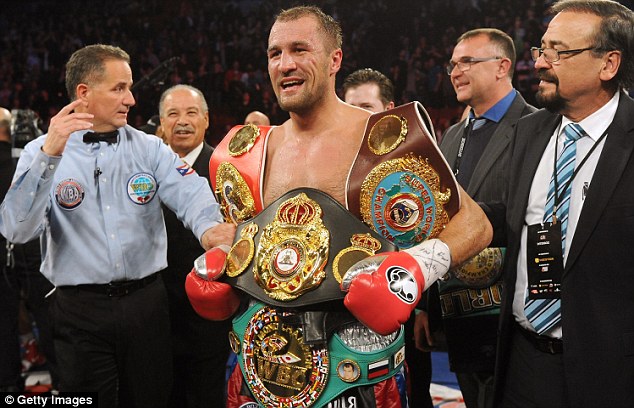 The large Bell Centre crowd booed when referee Luis Pabon stopped the fight, with the dazed Pascal (29-3-1) against the ropes from a series of blows from Kovalev (27-0-1).

And the Canadian wasn’t happy with the stoppage, immediately calling for a rematch after the bout was stopped, insisting: ‘I was still in the fight.

Russian Kovalev retained his WBA, WBO and IBF titles during the bout in Montreal ‘Kovalev looked to have won seven of the eight rounds in the scheduled 12-round bout.

‘How I started I didn’t like,’ said Kovalev. ‘But after the fourth round I got control of Jean and what you saw — I got him with a good right hand and he lost.’

Kovalev retained his WBA, WBO and IBF titles. Pascal, the former WBC champion from Montreal, was stopped for the first time in his career.