Jamie Conlan is ready for the crunch test: John Breen 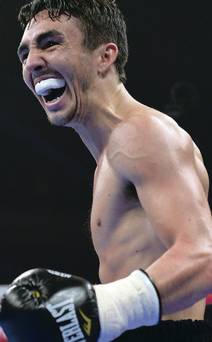 On the rise: Jamie Conlan can take a step towards a World title fight

Jamie Conlan will take on hard punching Filipino Daryl Basadre in the toughest fight of his career at the Titanic Quarter on September 6. Conlan will bid to add the WBO inter-continental super-flyweight title to his WBO European belt on the supporting bill to Carl Frampton’s mouthwatering World title showdown with IBF super-bantamweight king Kiko Martinez.

Basadre boasts nine knockouts in his 12 victories with a solitary defeat and draw, while Conlan has 12 wins with eight knockouts which suggests a very tasty scrap indeed next month.

Indeed, the only loss of the 21-year-old Filipino’s record was last year to former WBC World super-flyweight champion Suriyan Sor Rungvisai in Thailand. Since then he has bounced back with three straight wins.

Conlan’s manager and coach is delighted with the challenge facing the Belfast man who can take a significant step towards a shot at the WBO World title should he emerge victorious.

John Breen said: “This is a really big test for Jamie and a great opportunity to show that he is genuinely world class.

“A win against this guy and I would expect him to move into the top three in the WBO ratings.

“Basadre’s record shows that he is a big puncher, he’s only lost to a former World champion and that was at bantamweight. Sooner or later you have to take a tough fight like this to move forward and Jamie will be ready for it.

“It’s going to be a great night’s boxing with three great fights and if all three local men win, what a night it would be and what a boost for Irish boxing.”

Conlan has long been looking for a major test and insists that he will grab it with both fists.

“This fella looks like a decent boxer who can bang a bit too but I’m one hundred percent confident that I will prove far too much for him.

“I need to be fighting at this level as I’m now number eight in the World and soon I will be hopefully knocking on some doors. I can’t wait to box outdoors on this massive show and prove to the Belfast public that I belong at World level.”

Cyclone Promotions CEO Barry McGuigan added: “This contest is going to be explosive. Basadre has boxed a former World champion and never lost at super-flyweight. 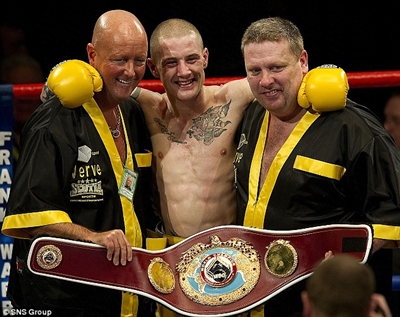 By Riath Al-Samarrai and Jeff Powell –

The boxing community was in mourning on Tuesday evening after the shock death of Dean Powell.

The 47-year-old, who spent 25 years in the sport as a trainer, cornerman and matchmaker for Frank Warren, worked with some of the British greats, including Joe Calzaghe, Lennox Lewis, Nigel Benn and Amir Khan.

Frank Warren announced the tragic news via a statement last night. It read: ‘All of us are deeply saddened and shocked by the loss of our very close friend and colleague, Dean Powell. Involved: The 47-year-old spent 25 years as a trainer, cornerman and matchmaker for Frank Warren

‘Dean was a valued and popular member of our team and within the sport of boxing.

‘Our thoughts and prayers are with his family and loved ones for their tragic loss.’

The cause of death has not yet been disclosed. A spokesman for Warren declined to comment.

Figures from the world of boxing paid tribute to Powell on Twitter.

Calzaghe said: ‘Shocked and saddened to hear the news of Dean Powell. Was in my corner for many of my big fights. RIP Dean x.’

Affer calling Warren he said: ‘This is tragic news.’