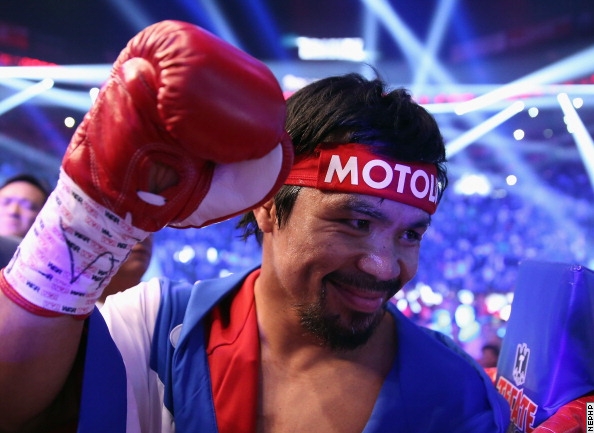 This can be gleaned when President Obama mentioned the name of Pacquiao as one of the many things he and the Filipino nation have in common in his speech while offering a toast to his host, President Nonoy Aquino, during the State dinner held at Malacanang Palace Monday night.

“There is our mutual obsession with basketball, “ President Obama said pertaining to the sport the Filipinos and he love most, he being a former player during his high school days at Panahou University in Hawaii where he grew up.

“There is our admiration for Manny Pacquiao,” he added in reference to the boxing icon, who, three years ago, was his guest at the White House in the course of promoting his fight against Shane Mosley scheduled May 7, 2011.

The American head of state then added rather jokingly: “Even if sometimes. His fight against Americans doesn’t turn out the way we’d like.”

The first U.S. African-American Chief Executive must have still been reminiscing the memorable moment when he and the eight-division world belt owner and himself met face-to-face at his Oval Office talking about basketball, boxing and how they were rendering service to their peoples.

Pacquiao was already a Congressman then representing the lone district of his wife Jinkee’s Province of Sarangani.

Unfortunately, however, Pacquiao was not included to the limited 300 individuals invited to the banquet.

The U.S. President might have, likewise, remembered that for two days, the Philippine flag flew in front of the hay Adams Hotel just across the White House signaling that a very important tenant, who will be meeting him the following day, was staying there.

That on the very same day of his visit, Pacquiao and his entourage created a minor disturbance – a multi-car pile up at the traffic light at the corner of 17th Street where the Filipino fighter was about to cross on the way to his meeting with the most powerful man on the planet.

The reason was passing motorists stopped their cars upon recognizing Pacquiao standing there waiting for the red light and started to wave their hands to greet him, some even snapping their cameras to take photos of the world champ using their cell phones.

Luckily, no one was injured although the minor accident made headlines marking Pacquiao’s tour of the U.S. capital something to remember by.

Pacquiao and wife Jinkee had a chance to meet the President and Vice President Joe Biden over lunch in a private, closed door meeting through the intercession of U.S. Senate Majority Leader Harry Reid, earning him the distinction of becoming the first reigning world boxing champion to have been invited to the Presidential residence.

When ring legend Muhammad Ali earned the same privilege, he no longer was a titleholder.

With his successful visit to Washington, D.C., Pacquiao was, not only believed to have established himself as a world-class politician, but, likewise, cemented a friendship between him and President Obama.

Before meeting Obama, Pacquiao was guided by Sen. Reid, whom he helped in his re-election bid, to a tour of the White House.

Top Rank bossman Bob Arunm and wife Lovee accompanied the Pacquaios to the White House where they spent 10 minutes with Mr. Obama in the Oval Office and talked about common interest.

“I invited him to my fight (against Shane Mosley at the MGM Grand Garden Arena in Las Vegas), but he said he didn’t think he could make it,” Pacquiao was quoted as saying then.

“But he said he would definitely watch the pay-per-view.”

Mr. Obama told Pacquiao he’d visit him in the Philippines, reason why the head of the most powerful nation in the world, indeed, was expecting to renew his friendship with the Filipino boxing icon during his state visit.

While inside the Oval Office, Pacquiao and Jinkee posed for pictures with Obama, who even struck a boxing pose.

“It was very unforgettable moment in my life. Ang taas pala ni President Obama,” Pacquiao, who stands 5-foot-6, told Filipino media men of the 6-3 Obama upon arrival in the country.

Obama gifted Pacquiao three grocery bags full of light blue M&M’s with the Presidential seal, along with a watch, also adorned with his official seal after their memorable meeting.