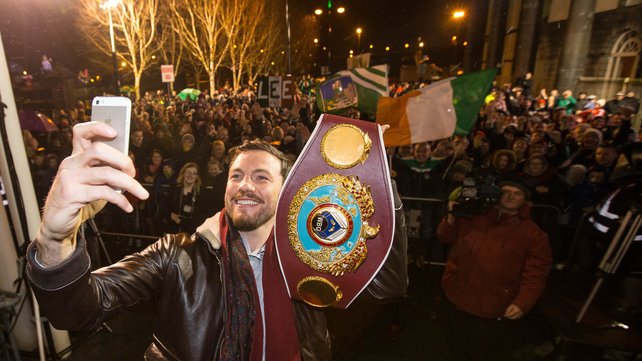 Andy Lee admits that his first WBO middleweight world title defence against the unbeaten Peter Quillin next weekend in New York will be a tough task but he remains confident of victory.

The Limerick man (34-2-0) won the belt in December when he stopped Matt Korobov in the sixth round of their championship bout, which only happened because Quillin (31-0-0) had chosen to vacate the title.

Quillin is now a heavy favourite to reclaim the crown when he faces Lee at the Barclays Centre in Brooklyn, New York on Saturday (early Sunday morning Irish time).

“This is very much a 50-50 fight. The winner of this will have a good claim to call himself the best middleweight in the world,” Lee told RTÉ Sport.

“He’s a very good boxer. He’s a former champion. It’s a hard fight, no doubt about it, but it’s one I’m capable of winning and confident of winning.”

“I know a lot of people get involved

in trash-talking and hyping up

Lee doesn’t see the fact that Quillin gave up the title as particularly significant as he doubts the American feared Korobov.

“I believe it was for political reasons that he vacated the title,” said Lee. “His promoter didn’t win the purse bid and I think that was more the reason why he gave up the title.

“Because he did I got the opportunity to fight Korobov and here I am now champion. It’s funny the way it works out.

“I don’t think he turned down the Korobov fight out of any fear. I’m not trying to gain any confidence from that, I’ll just take it at face value.”

Lee declined to get involved in “trash-talk” about Quillin, saying he considered the former champion a friend, but warned against thinking he would be a “nice guy” in the ring.

“There’s no ill-feeling. There’s nothing personal between us. After the fight we’ll shake hands but when the bell rings we’ll be trying to take each other’s head off.

“We both now that while we’re in there, there’ll be no friendship in battle but once it’s over we can be friends again.

“I know a lot of people get involved in trash-talking and hyping up but it has to be real. For me, if it’s not genuine it doesn’t come across well. I’ve never been the type to do that.

“That’s me outside the ring but as you walk from the dressing room it’s time to switch on and change. You become a different person once you get inside that ring. You have to. You can’t be the nice guy in the ring because you’ll get quickly found out.”

Lee also revealed that he never lost faith in his ability to become a world champion, even when it looked his chance had gone after losing a WBC title shot against Julio Cesar Chavez Jr in 2012.

and believing in myself I got

there in the end” – Andy Lee

“There definitely were times when I had moments of doubt but perseverance, I believe, is the reason I got here,” Lee said.

“[I was] working every day towards something that I wanted, even when it looked like it was never going to happen. Keep working, keep believing, and every day just making small increments, improving on a small level.

“Eventually I got the chance, my big break came and I took it. Through perseverance, hard work and believing in myself I got there in the end.”

Lee is hoping for big support in a city where he has fought three times previously but admitted his dream bout would be a title defence in Limerick.

“It’s a place I’m comfortable fighting in. I spent a lot of my career over there and I have a lot of friends in New York so I should have a good crowd for the fight.”

“To defend the world title in Limerick would be a dream come true. I’d be very much pushing for it during the summer or maybe the early autumn. But I can’t look too far ahead, I have a hard fight this Saturday.”