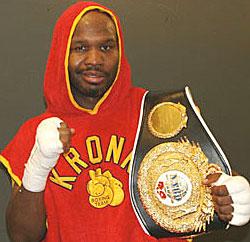 NABO and WBC International Heavyweight Champion Johnathon Banks hosted a media workout at Bad Boy Gym in Detroit on Tuesday, in preparation for his upcoming rematch against Seth “Mayhem” Mitchell on February 16 at Boardwalk Hall in Atlantic City. He also hosted a roundtable discussion last Saturday. Here’s what Banks had to say about his upcoming fight at those two media gatherings.

“Like all of my camps, I’m working on my balance, my speed and on my defense, making sure the little things are taken care of. I like a quiet camp, even here in Detroit, no time for socializing with friends leading up to the fight. Just Sugar (Hill) and I like it always is. Wladimir calls all the time so we talk a great deal as we would at his camps. I did two weeks of conditioning in Los Angeles and now we’ll have four weeks in Detroit until fight week.

“My schedule is up at 5 a.m., run for an hour, breakfast at 8 a.m., nap, lunch at noon and gym at 2 p.m. It almost feels like I should be doing something else because I was so busy in my last camp training Wladimir while also preparing for the first bout with Mitchell. Like my plate is only half full.

“After my first professional loss it took a little while to regain my confidence, but I’m sure Seth will have his. I’m preparing for the very best, focused Mitchell. I expect him to be much better this time and I’ll be ready.”

“Seth Mitchell has contradicted himself. Right after the fight he was very humble, gave me respect for the win and said he was going to have to go back to the drawing board, work his way back to the position he was in. Now I hear him saying things like ‘I didn’t win the fight or knock him out because I was the better man that night’ and that it was his mistakes that were the cause of the loss. I find that to be out of character for this guy who seemed to be humble and respectful of me as a fighter prior to the first fight. When I lost to Adamek as a cruiserweight, I lost.

“I can see him coming for the knockout this time. He says he is going to be different this time. I believe he will be.

“I’ve been doing this a long time and it is a lonely man’s sport. I’ve experienced the bottom, middle and top. I experienced hunger and what it really feels like to sacrifice to have your dreams come true.

“I had a great night that night [November 17]. I had a lot of confidence and a special motivation. Once you feel your reason for being there, you get out there, find your rhythm and go to work. It was a great night and I do wish Emanuel [Steward] were there physically to see it happen. He would have been so happy. I miss him everyday still but know he is happy for me and will continue to lend me his spirit when I am training or getting ready for a fight.

“After I won I was in a great position and thought, okay, let’s move on. It took so long for the first fight to happen as it was pushed back, postponed and now here we are again. I just said to myself ‘I’m just going to have to stay here a little bit longer.’ I’m fine with that because I’m confident the results will be the same as the first fight in the sense that I will come out victorious.

“For me to be fighting back on HBO so soon after the first fight is a great opportunity. If your goal is to become the heavyweight champion of the world, you should be fighting on the world network, which for me is HBO.

“I think fans look at the heavyweight division differently now. I feel that I can knockout anyone I catch. I feel very strongly I can do that.

“I think the American heavyweight division is crawling back from the hole it found itself in these past few years. There are a lot of talented fighters right now on the scene and that makes the division very exciting.

“It’s been a long time since I’ve trained for a fight at home in Detroit instead of overseas, but it’s been exactly the same. I do what I need to and get ready for the fight in a very quiet, professional atmosphere, just like it’s always been. I’ve got a job to do and it doesn’t matter where it’s at.”