Result:   Merlito Sabillo retained his title stopping challenger Jorle Estrada by TKO in the ninth round.  Estrada down through body shot. 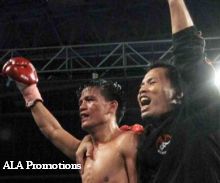 Manila(PNA) – Newly-crowned World Boxing Organization mini-flyweight champion Merlito Sabillo, plans to stay in the 105-pound division throne as long as he can.

“I will focus hard in training so I can keep my title,” said Sabillo, who in winning the crown, became one of the only three remaining world boxing champions following successive defeats suffered by his more illustrious compatriots Manny Pacquiao, Brian Viloria and Nonito Donaire Jr.

Sabillo knocked out Colombian Luis dela Rosa in the eighth round in his first overseas fight at the Coliseo Mario de León in Cerete, Colombia last March 9. It was for the interim title, and after Moises Fuentes moved up in weight and vacated the crown, the WBO decided to install the Filipino as the new champion.

Sabillo carried his belt as he graced yesterday’s PSA Forum at Shakey’s Malate along with his trainer Michael Domingo and ALA Promotions vice president Dennis Cañete.

“We are waiting for the WBO approval for his voluntary defense before we choose an opponent. But it will be among the top 10 in the mini-flyweight class,” said Cañete.

Sabillo sent Dela Rosa down in the seventh round of the brutal and exciting contest then finished him off in the 2:52 mark of the next round.

“It was an exciting bout and even WBO president Paco Valcarcel was impressed and said Sabillo can become a great champion,” said the ALA Promotions official.

Sabillo is undefeated in 21 fights with 11 knockouts, two of them coming in the first round. But he has what it takes to last as well because three of his wins came in 12-round decisions.

Sabillo, who turned pro when he was 24, is aware of the fact that the Philippines just lost three world titles following successive losses by Manny Pacquiao, Brian Viloria and Nonito Donaire Jr.

He wants to use this as motivation.

“It’s a little sad to see them lose. But that’s sports. You win some and you lose some,” said Sabillo, now ranked among Donnie Nietes (WBO minimumweight) and Johnriel Casimero (IBF light-flyweight) as the remaining Filipino world champions. 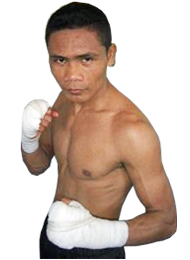 Donnie Nietes, who is a Filipino professional boxer, was born in Bacolod City, Philippines on May 13, 1982 and stands 5 feet 3 inches. His first fight was against Walter Suaybaguio in San Fernando, Cebu, Philippines, winning a six round unanimous decision. Also known as Ahas, he has fought 29 times, winning 25 with 14 of those wins via knockout, with 1 loss and 3 draws.

He won the WBO minimumweight title with a unanimous 12-round decision against Pornsawan Porpramook in Cebu City Waterfront Hotel, Lahug, Cebu City, Cebu, Philippines on September 30, 2007.

Nietes currently holds the WBO Jr. Flyweight title, which he won back on October 8, 2011, when he defeated then WBO champion Ramon Garcia Hirales. Nietes captured the title by a 12th round unanimous decision.