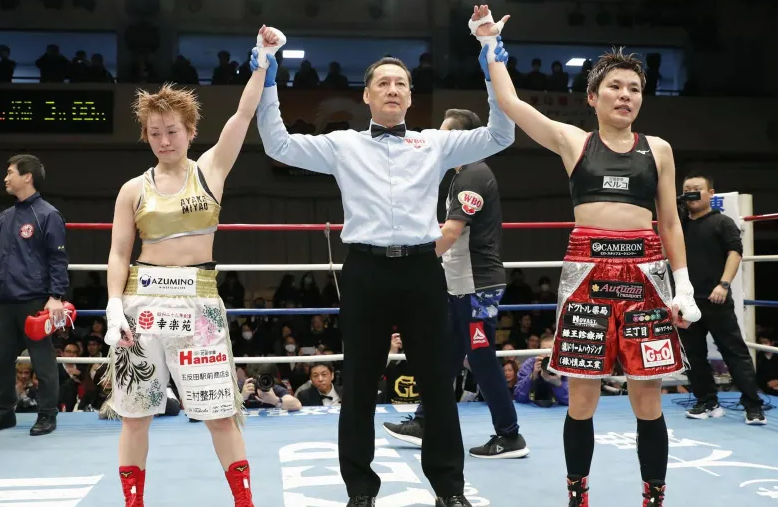 On paper this looked like an excellent match up between two world class veterans. Whilst both were coming to the end of their careers both are still world class and we were expecting an ultra competitive bout between fighters who have been fighting at the top of the sport for years. When it came to the in ring action proved to be just as competitive than we expected.

Coming in we had anticipated the speed and volume of Miyao to be one of two major differences. The other with the power and strength of Tada. And this really proved to be the case with neither fighter ever doing enough to really dominate the action.

Early on Miyao used single shots, though lack of power, something that has been obvious through her career, meant they never bothered Tada. Whilst they were landing clean they did little whereas Tada’s shots were having a clear visible impact, and kept Miyao at range. Whilst the volume seemed to be from Miyao the heavier blows were certainly from Tada.

As we went through the rounds Miyao’s work rate grew and grew. The single shots were becoming less common and instead it was short raids and flurries from the Watanabe Gym fighter. She was coming in and letting 2 and 3 punch combinations go, firing off with both hands. This caused the action to get a touch messy, though both certainly had their moments in what were some hard to score rounds.

​Tada started to look more and more like she was tiring in the later rounds of the fight whilst the quicker, sharper Miyao, really turned it on late, easily out landing Tada in the final rounds, as she tried to swing things her way. It was this late effort from Miyao that could made all the difference had it come just a few rounds earlier.

In the end the bout was a hard one to score. Both fighters had clearly taken a number of rounds each, but the others were debatable either way, and that showed on the score cards.

The result, a draw, leaves the title vacant.