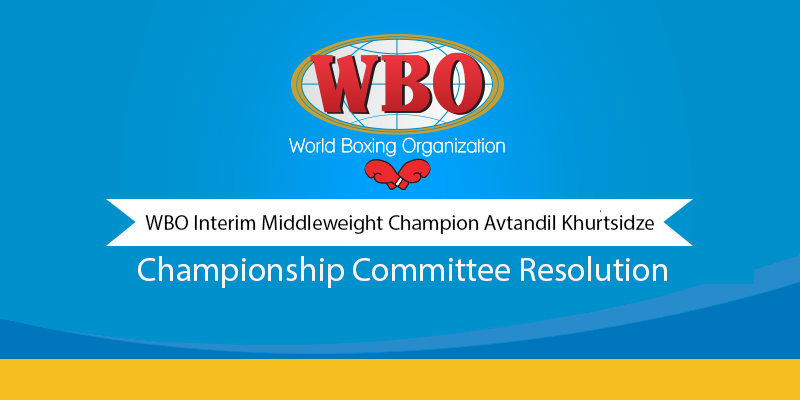 On June 8th, the World Boxing Organization Championship Committee in accordance with Rule 19 of the WBO Regulations of World Championship Contests, sent a ‘show cause letter’ to WBO Interim Middleweight Champion Avtandil Khurtsidze through his Promoter, Lou Dibella, Dibella Entertainment, giving him five (5) days from the date of the notice of why the Committee should not recommend to the WBO Executive Committee that Mr. Khurtsidze’s title be vacated. No answer was received.

The Committee having examined all facts concerning the current status of the WBO Interim Middleweight Championship of Avtandil Khurtsidze, having requested that he show cause why his WBO Interim Middleweight Championship should not be vacated, and being fully advised in the Premises, hereby resolves and hereby recommends the following resolution to the WBO Executive Board:

The WBO Executive Board having received the Resolution of the WBO World Championship Committee hereby determines and resolves:

WHEREAS, Avtandil Khurtsidze won the WBO Interim Middleweight Championship on April 22, 2017, and;

WHEREAS, Avtandil Khurtsidze is unavailable to complete his responsibilities as WBO Interim Champion to contest the Championship and that sanctioned and scheduled contest was cancelled for reasons unrelated to Avtandil Khurtsidze’s WBO Participation.

Avtandil Khurtsidze is notified that this is a final determination of the WBO and under the WBO World Championship Rules that his sole appeal is an appeal to the WBO Complaints and Grievance Committee, which must be commenced by written complaint to the WBO within 10 days of this date, after which it will be final without further recourse. 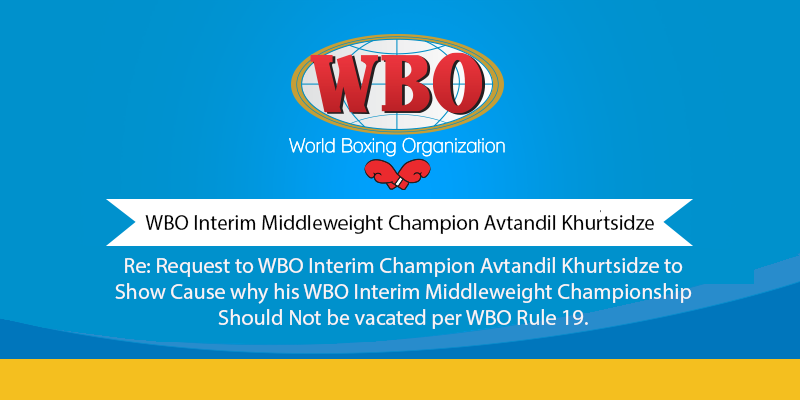 Re:  Request to WBO Interim Champion Avtandil Khurtsidze to Show Cause why his WBO Interim Middleweight Championship Should NOT be vacated per WBO Rule 19.

It has come to the attention of the WBO World Championship Committee that you have been charged and arrested in a Federal Prosecution in the Southern District of New York, in the United State of America in a case entitled United States v. Shulaya, et al.  A link to the details of the Charge is:

You are reminded that WBO World Championship Rule 19 provides:

Please also be advised that the WBO has been contacted by the World press asking for our reaction to reports that you have been charged with serious Federal Crimes.  We gave and no reaction to the accusations in the indictment.  Please be advised, however, that any involvement by a WBO Participant with illegal activities would be considered a much more serious matter to your WBO World Championship Committee, and additional inquiries by the Committee may be required.

This request to show cause is limited to the report that you cancelled your WBO World Championship July 8, 2017 without good cause in violation of Rule 19.  Please limit your response to that issue. 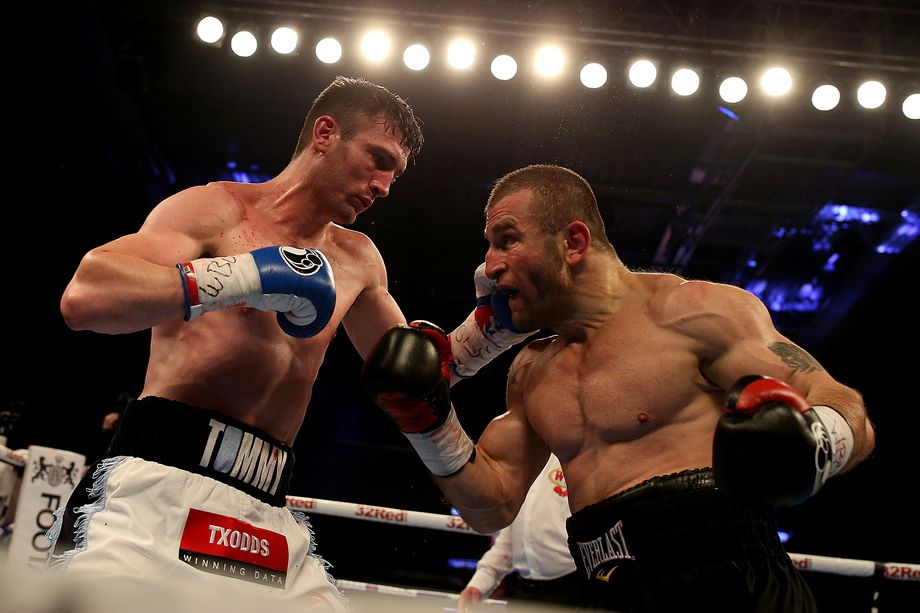 Avtandil Khurtsidze is headed for a world title shot.

Avtandil Khurtsidze has a shot at Billy Joe Saunders on deck, as the Georgian middleweight dominated Tommy Langford today in Leicester, England, stopping the previously unbeaten home fighter in the fifth round.

Khurtsidze (33-2-2, 22 KO) was his usual self, giving up a lot of height and reach but coming at Langford (18-1, 6 KO) like a tornado, constantly trying to land big power shots, and succeeding enough to keep Langford off-balance. It didn’t help Langford that his own power wasn’t nearly enough to dent the durable Khurtsidze, who shook off everything and just kept charging forward.

Khurtsidze, who turns 38 in early May, is tentatively set to face Saunders (24-0, 12 KO) on July 8 in London. Can the all-action veteran pull an upset and become a world champion late in his career? 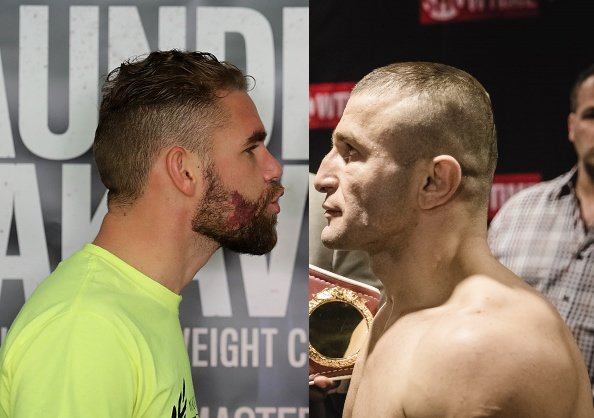 The WBO informed promoters for its middleweight champion, Billy Joe Saunders, and No. 1 contender Avtandil Khurtsidze on Thursday to begin negotiations for a title fight.

If Frank Warren, Saunders’ promoter, and Lou DiBella, Khurtsidze’s promoter, can’t come to an agreement within 10 days a purse bid will be ordered. The minimum bid for the Saunders-Khurtsidze fight would be $200,000, as per WBO rules for the middleweight division.

England’s Saunders (24-0, 12 KOs) reportedly is interested in fighting Japan’s Ryota Murata (12-0, 9 KOs), the WBO’s No. 2-ranked contender at 160 pounds. A fight against Murata would be more lucrative for Saunders, particularly in Japan, but Khurtsidze would have to be compensated before agreeing to step aside and allow that fight to happen.

Khurtsidze has been adamant, though, that he wants to be Saunders’ next opponent.

Brooklyn’s Khurtsidze (32-2-2, 21 KOs) has been the No. 1 contender for Saunders’ championship for nearly 11 months, since he stopped previously undefeated Antoine Douglas (19-1-1, 13 KOs), of Burke, Virginia, in the 10th round March 5 in Bethlehem, Pennsylvania. The 37-year-old Khurtsidze’s No. 1 ranking didn’t stop the WBO from skipping him last month and installing its 154-pound champion, Canelo Alvarez, as the mandatory challenger for Saunders.

An Alvarez-Saunders fight would’ve been much more lucrative for Saunders – and the WBO – but Alvarez (48-1-1, 34 KOs) ultimately agreed to face fellow Mexican Julio Cesar Chavez Jr. (50-2-1, 32 KOs, 1 NC) on May 6 at an undetermined site. Khurtsidze’s representatives didn’t file an appeal of Alvarez’s installation as Saunders’ mandatory challenger because they were told the WBO would grant Khurtsidze a shot at Saunders if Alvarez decided to fight Chavez.

The 27-year-old Saunders has fought just once since he won the WBO 160-pound title from Ireland’s Andy Lee (34-3-1, 24 KOs), whom Saunders defeated by majority decision 13 months ago. The British southpaw beat Russia’s Artur Akavov (16-2, 7 KOs) by unanimous decision December 3 in Paisley, Scotland, but admitted after their 12-round fight that he performed poorly during his first fight in nearly a year. 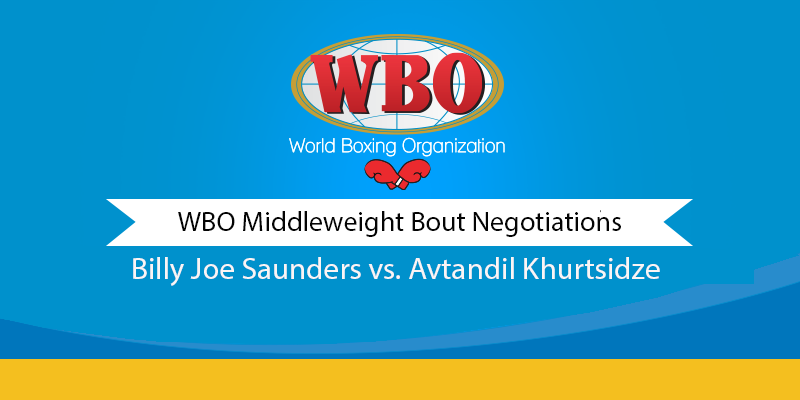 Please be advised the parties have ten (10) days to negotiate an agreement for the WBO Middleweight Championship bout between Billy Joe Saunders vs. Avtandil Khurtsidze. If an accord is not reached within the time frame, a Purse Bid will be ordered.

The minimum acceptable bid for the Middleweight division is $200,000.00 (Two Hundred Thousand Dollars).

Previously, on June 7th, negotiations were ordered for the WBO Middleweight Elimination Bout between Avtandil Khurtsidze and Tommy Langford. However, at this time, the order has been left without effect.

Please be advised that the future of the division will be discussed in depth during the WBO 29th Convention to be held in San Juan, Puerto Rico from the 17th to the 21st of October.