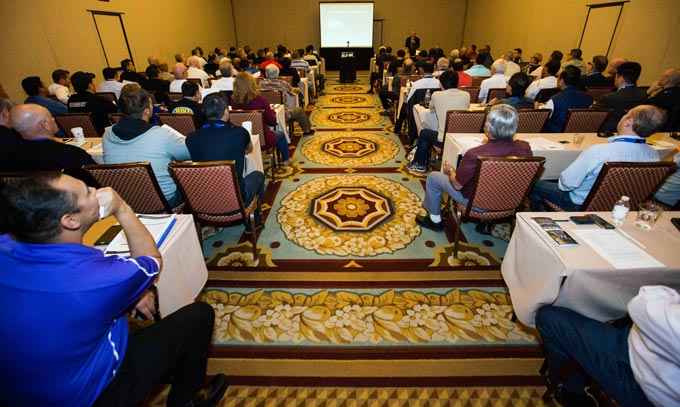 The second business day of the 27th annual WBO Convention at Caesars Palace Las Vegas kicked off yesterday morning with a much anticipated discussion on proffering recommendations to U.S. Senators John McCain and Harry Reid recommending several amendments to the Muhammad Ali Act, originally passed by Congress in 1996.

However, a special visit from former WBO champion Marco Antonio Barrera, prompted a short delay in the days activity to allow WBO President Francisco “Paco” Valcarcel to celebrate the arrival of the Hall of Fame champion.The visibly warm relationship between Valcarcel and Barrera was highlighted as Barrera called the WBO his “family” before Valcarcel called Barrera the star of “the golden age of Mexico boxing.””Marco became an example of great champion,” Valcarcel said, “A Very intelligent family man, clean man. Honest. We would be proud to tell any child this is a model for you.”

From there WBO General Secretary Jose Izquierdo gave a presentation to the members and the Executive Committee on a list of recommendations to the Muhammad Ali Boxing Reform Act and ways that the WBO can work with the US Federal Government to help implement these changes.

Izquierdo recommended that the WBO petition the federal government and the ABC to implement several changes such as clarifying the role of an “advisor.”

We think the law should define some language that who an advisor is,” Izquierdo said. The Muhammad Ali Boxing Reform Act prohibits a promoter from also acting as a manager to a fighter, or from having an interest in managing a fighter. However, this is something that has been circumvented in boxing through the gray area regarding what the role of an “advisor” is.

Izquierdo also recommended stiffer penalties for violations to the Muhammad Ali Boxing Reform Act, increasing the maximum jail sentence for a violation as well as the minimum fines. Izquierdo discussed raising the penalty to five years for a violation.

“We think the law is very good,” Izquierdo said of the proposed increased penalty, “we want to give it more bite and to clarify it.”

Izquierdo also wanted to bring uniformity to the Act, expressing concern over the “piecemeal regulations” that were different throughout the country.

Another recommendation by Izquierdo was the prohibition of charging a fee for appeals, a policy implemented by some other sanctioning organizations.

“It is not transparent when you charge a fee for something that should be simple due process,” Izquierdo said of the policy.

President Valcarcel then chimed in, condemning the policy in boxing where a fighter would leapfrog over more deserving contenders not due to his accomplishments in the ring but due to his connections to a particular promoter.

The President and Executive Committee also spoke at length about a poorly administered fight out of Puerto Rico in which a judge not only erroneously scored a round 9-7, but then was able to convince the commission to allow him to amend his scorecard after turning it in. The commission in Puerto Rico had not taken action against the judge who not only made a critical error in regards to the 10-point must system, but also tried to influence another judge to also score the round in question in a similar manner. This judge not only avoided suspension, but continued to work in Puerto Rico.

“That guy is incompetent,” Valcarcel said of the judge in question, “unfortunately they (the commission) stuck their head in the sand like an ostrich. This law must be amended so that it has teeth.”

In the end, the WBO Executive Committee unanimously voted to establish a committee to further explore the issue and to embrace recommendations for the proposed amendments to the law. This committee will subsequently present its report to legislators at a later date.

Before closing for lunch, the Executive Committee briefly discussed several other issues, including one present to the Committee by WBO member Markus Aslani regarding an organization operating in Europe called the GBA. Aslani expressed serious concern over the safety standards of the GBA and its rather lax administration of these standards. President Valcarcel requested Aslani to present more information to him on the matter so that he could make an informed decision regarding the discussion at hand.

After lunch the event split up into two groups, with judges and officials attending a ABC Seminars while the majority of members of the Executive Committee hosted a session for WBO supervisors. The supervisor’s seminar took a moment to moment to recognize James Toney, who was in attendance, as well as Marc Ratner, former Nevada Athletic Director. Interestingly enough, considering the guest in attendance, was this issue of a fighter “losing too much weight” at the weigh in.

“James came in twelve pounds over once,” Ratner said in regards to Toney, “he still made weight. I didn’t know that could happen.”

Several members of the Executive Committee then openly questioned if weigh-ins the day before a fight were doing more damage to the health of fighters than the older system of having them weight in the day of the fight. However, the position regarding the weigh-in remained disputed.

“Promoters use the weigh-in as a promotional event,” WBO vice president John Duggan said of the day before weigh-in.

Also discussed at the supervisor’s seminar was the role of a WBO supervisor, as the representative there to award the WBO championship in accordance with WBO rules.

“We are there to give the prize away,” WBO legal advisor Andrew Horn said, “not to promote the fight.”

Also, there was a tremendous rules meeting discussion spearheaded by Greg Sirb, executive director of the Pennsylvania State Athletic Commission. Topics included the importance of detailed rules regarding hand wraps, with the State of Colorado cited as a shining example of a well written rule, as well as the role of the supervisor when a judge badly drops the ball as had happened in Puerto Rico during the Jose Lopez-Roberto Castaneda debacle. The role of a supervisor’s discretion was a hot topic during the debate. Also discussed was how a supervisor is to handle a dispute regarding the brand of gloves used in a contest, with the recognition that the contract ultimately in controlling if there is language regarding the gloves. The Convention wrapped up that evening with another cocktail party at 7pm. The Convention will resume at 8:30 on Thursday with a presentation by Chris Algieri as well as the championship ratings committee.