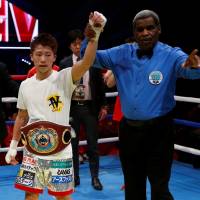 The 36-year-old Kono, who lost his title to Luis Concepcion of Panama in August, fought aggressively from the beginning. But Inoue kept his poise throughout the match with a hit-and-away strategy.

The champion landed a counter left about 40 seconds into the sixth round, from which Kono barely stood up. But Inoue finished it moments later as he rushed to Kono raining blows.

The stoppage time was 1 minute, 59 seconds remaining in the round.

“I felt good on that one,” said Inoue, who stayed unbeaten with a 12-0-0 record in his professional career, of his counter left that delivered the fight’s first knockdown of Kono.

Inoue said that his game plan was to capitalize on Kono’s aggressive style of fighting, letting him come forward and then land counter blows.

“We thought that he wouldn’t come against me in different ways,” the 23-year-old said of Kono’s fighting style. “I had patterns to attack on him from myself as well, but we stuck to our game plan to let him attack on me and it worked that way tonight. I thought I was able to watch my opponent well, instead of keep swinging my punches.”

Kono, dubbed “Tough Boy,” had said that retirement crossed his mind after his WBA belt slipped out of his hands during the summer, yet didn’t offer specific details about his future after Friday’s bout by saying, “I’ll take some rest, and think of what I’ll do.”

There’s been speculation that Inoue will have a fight against WBC super flyweight champion Roman Gonzalez, who’s arguably the world’s best pound-for-pound boxer with a 46-0-0 record, in the near future.

Inoue said that he wants to have the potential big match against the Nicaraguan, though he and his gym president Hideyuki Ohashi said that it’s getting harder for the Japanese boxer to stay in the weight class.

“It’ll be a matter of my weight and the timing (of the fight),” Inoue said.

In the other world title match at Ariake Colosseum, three-division champion Akira Yaegashi struggled but managed to post a 12th-round TKO win over Thailand’s Samartlek Kokietgym, defending his IBF light flyweight belt for the third time.

“I could’ve finished it earlier, but I had hard times fighting against (Samartlek),” Yaegashi, 33, said. “My corner gave me the green light (in the 12th round), so I did go, and I feel relieved I was able to knock him out.”

Meanwhile, London Olympic middleweight gold medalist Ryota Murata dropped Mexican opponent Bruno Sandoval to the canvas with a right in the third round to post a KO victory.

“My opponent today was the strongest (among the four I faced this year), so it gave me confidence,” said Murata, who improved his pro record to 12-0.

Asked if he’d like to challenge for a world title soon, he quickly responded, saying, “I want to do it next.”

Murata debuted as a pro at Ariake in 2013, but he said that he wasn’t in a position to say he’d aim for a world championship at that time. Three years later, however, he feels he’s finally reached a point he can say so.

“I perfectly hit his chin with my right between my index and middle fingers,” Shimizu said. “I’m pleased I was able to entertain the fans a little bit, though I wanted to fight a little longer.”