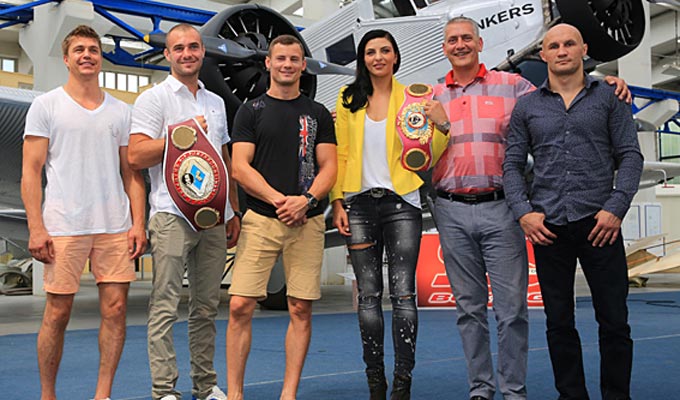 SES Boxing held the final press conference on Monday for Saturday’s clash between two-time world champion Robert Stieglitz against WBO #9 Sergey “The Ghost” Khomitsky (29-10-2, 12 KOs) at the Anhalt Arena in Dessau, Germany. The presser took place in front of an old transport aircraft named JU 52 at the “Hugo Junkers Museum”

Robert Stieglitz: “I am forewarned. A ghost always comes surprisingly and unexpectedly. I’ve prepared myself for the fighting style Khomitsky so I’m safe. He can’t scare me. Khomitsky is good for surprises, well rested and he boxes smart. His victory for the WBO European championship against Buglioni in England was no coincidence. One may never, ever underestimate him. He is a daredevil! If I want to get back “my belt,” then the only possible way is with a clear victory over this “ghost!”

Sergey Khomitsky: I’m something of a fear maker! That’s where my fight name ‘The Ghost’ comes from. I make pressure, move forward, makes surprises and many opponents can’t adjust. I know Stieglitz from many fights I watched myself. He will be defeated!

SES promoter Ulf Steinforth: We want the WBO world title of Abraham as quickly as possible! Khomitsky was the highest rated fighter who would face Robert. A WBO European champion must not and will not be underestimated!