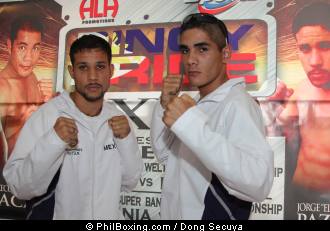 The trio said that they are well prepared and win or lose, fans will certainly enjoy the fights and they will be competitive.

“Our two boxers have a bright future and they trained hard,” Gaytan said, “We will give fans a spectacular fight.”

“I trained for two and a half months,” Martinez said, “I have seen videos of Jaca. My strategy is to fight from a distance and wiat for my chance to hit hard. Jaca is known in my country because he fought Juan Manuel Marquez. Jaca is a good boxer and a southpaw, so I will also learn from him in this fight.”

Martinez has also lost to a quality boxer, Lucas Mathysse. “He was very fast and strong and knew how to push and hold.”

Gaytan said that Martinez was competitive against Mathysse in the early rounds but the body blows really hurt him and made him fade. In the later rounds.

Pazos for his part said “I came well prepared, I am also considered a promising fighter in Mexico. So this will be a battle between two promising fighters. I have seen Servania fight. He is a good fighter, very strong and very fast. This will be a spectacular fight, the most important fight of my career.”

Mike Lopez, the ever ready cornerman for Latino boxers here in Cebu, will be in the corner of Pazos and Martinez together with Magdaleno Montoya from Team Montoya.

Gaytan also commented about the fact that only Fernando Montiel and Rosbel Montoya are the only Mexican boxers who have won in Cebu. “80-90 percent of Filipino boxers also lose in Mexico. It must be the travel, climate, diet and change of time zones.”

Rosbel “Lobito” Montoya (36-4-1, 30 KO’s) will face Cebu sportswriters on Wednesday. He is scheduled to fight Jason “El Niño” Pagara (28-2, 17 KO’s) in the main event of Pinoy Pride XV: The Rematch. They will vie for the WBO International jr. welterweight title.

The weigh-in will be held at the SM Cebu City Mall on Friday noon and fight day will be at the Waterfront Cebu City Hotel on Saturday. 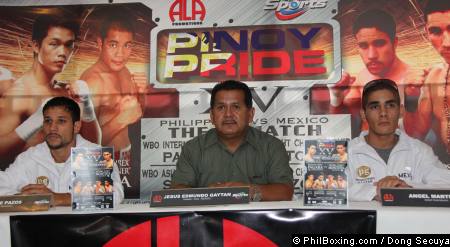 Two of the three Mexican protagonists that will be seeing action this Saturday, August 18, 2012 for the Pinoy Pride XV: Philippines vs Mexico THE REMATCH will arrive Cebu, Philippines today August 13, 2012.

Team Mexico, that will be headed by party spoiler Rosbel Montoya who beat young Philippine prospect Jason Pagara last year will be joining his countrymen Jorge Pazos and Angel Martinez tomorrow when he is set to arrive 11:55 pm. Montoya will again face Pagara in a mouth-watering rematch that will either prove Montoya’s win was no fluke or will Jason have his way and exact revenge. This bout will be for the WBO International Junior Lightweight Championship.

Jorge Pazos will be seeing action against one of the Philippines more talented prospect Genesis “Azukal” Servania in a 12 round title bout that will be having the WBO Asia Pacific Super Bantamweight title at stake. Servania will be gunning for his 2nd straight title as he just recently won the WBC International Silver Super Bantamweight Championship against the grizzled and tested Genao “Poblanito” Garcia in a spectacular 12 round TKO performance.

Completing the Mexican trio will be Angel Martinez that is out to prove to Jimrex Jaca that his youth wont be a hindrance in helping their team win this battle with the Filipinos. Martinez will be facing Jaca in a non-title bout.

Pinoy Pride XV” Philippines vs Mexico THE REMATCH is brought to you by ALA Promotions and ABS CBN Sports happening at the Waterfront Cebu Hotel and Casino on August 18, 2012. Tickets are available in all SM City Cebu and Consolacion Customer Service Counters, ALA Promotions Head Office (032.2364611), ALA Boxing and Fitness Gym at the BTC, Cebu, USA Sports and Bisaya Ispisyal outlets, Gaisano Tabunok, Mooon Café @ the I.T. Park in Lahug, Cebu City and at the Waterfront Cebu City Hotel and Casino.

This ALA Promotions and ABS-CBN Sports presentation of Pinoy Pride XV: Philippines vs Mexico THE REMATCH will be telecast via ABS-CBN Channel 2 1015 am and replay at 615 Pm on Studio 23 the same day.