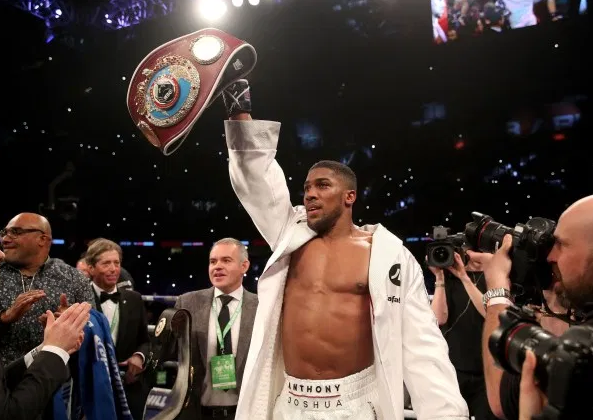 Sweet revenge was gained for the most bankable heavyweight in the world, who avenged his lone career loss with a sound 12-round decision win over Andy Ruiz in their DAZN-streamed title fight rematch Saturday evening in Diriyah, Saudi Arabia.

Scores were 119-109 and 118-110 twice for Joshua, who boxed smartly for 12 rounds in the Middle East after suffering a humbling knockout loss six months ago in midtown New York.

England’s Joshua, a 2012 Olympic Gold medalist for Great Britain—entered the ring as a beltless challenger for the first time since April 2016, in the moments before his title-snatching 2nd round knockout of Charles Martin. Everything about his appearance was a clear indication of a return to basics and undeniable focus.

The former unified titlist came into the fight nearly 11 pounds lighter, while California’s Ruiz—attempting the first defense of the titles he acquired in his shocking 7th round knockout of Joshua in June—was a beefy 15 pounds heavier than on the night of the historic upset.

Joshua’s approach was also different, patiently boxing from the outside as a clear sign of respect to the power Ruiz possesses. The tactical opening round produced drama in the final moments, as a sharp right hand by Joshua produced a cut outside the left eye of Ruiz.

The favor was returned by the defending titlist in round two. Joshua continued to box and circle, but Ruiz was able to split the difference, shooting a crisp and quick jab which caught the corner of Joshua’s left eye in also producing a cut.

Whereas the third round of the first fight produced three knockdowns and the leading candidate for Round of the Year, the sequel saw a boxing match break out. Joshua jabbed and utilized lateral movement, while Ruiz moved forward but failed to work his way inside.

That changed midway through round four, as Ruiz stood in the pocket and forced Joshua on his bicycle. Joshua continued to box and move, but was forced to absorb a right hand while Ruiz was able to slip counter shots. Joshua fought with more aggression in the final minute, though it was Ruiz who seized momentum in fighting his way out of clinches and remaining active in the moments where Joshua sought to slow down the action.

Joshua adjusted in round five, flicking his jab and following up with a quick left hook. The absence of a jab from Ruiz made it more difficult than necessary for the defending unified titlist to land anything of the fight altering variety. Blood continued to flow from the eyelid of Ruiz, although Joshua’s desire to stick and move created a missed opportunity to exploit the wound.

It was enough, however, to allow him to bank rounds and with Ruiz unable to change that trend.

The second half opened with Joshua sticking with what worked all night, working his stick and remaining a mobile target. The type of disaster which struck in his career in June never came close to happening on this crisp night in the open air arena in the desert. Instead it was Joshua remaining in control and Ruiz struggling to cut off the ring, or land anything of consequence once he managed to fight at close quarters for much of round seven.

Falling well behind, Ruiz opened up his attack for the first time in the bout. Enough right hands landed to keep Joshua moving in reverse, the Brit not boxing as much but instead playing matador defense. The tactic frustrated Ruiz, who wasn’t nearly as active as was the case in the first case, the lack of momentum shifting knockdowns or comparable landed punches undoubtedly playing a huge factor.

After a late surge by Ruiz in round nine, Joshua reestablished desired distance in round ten. Ruiz grew visibly frustrated, to the point of dropping his hands and daring Joshua to stand and fight. It was never going to happen, not when Joshua was determined to reclaim what was his for more than three years.

Ruiz came out for the 12th and final round clearly aware that he needed a knockout to win. Joshua used it to his advantage, planting his face long enough to rake an overhand right across the grill of his lone conqueror. It was just enough to freeze Ruiz in his tracks and allow Joshua to return to constant lateral movement. Ruiz continued to come forward in the final minute, but unable to land the type of blow that would prevent his reign from becoming one-and-done.

Six months of glory came to an end for Ruiz, who falls to 33-2 (22KOs). Both of his career losses have come in title fight, having dropped a competitive 12-round decision to Joseph Parker in their Dec. 2016 vacant title fight in New Zealand.