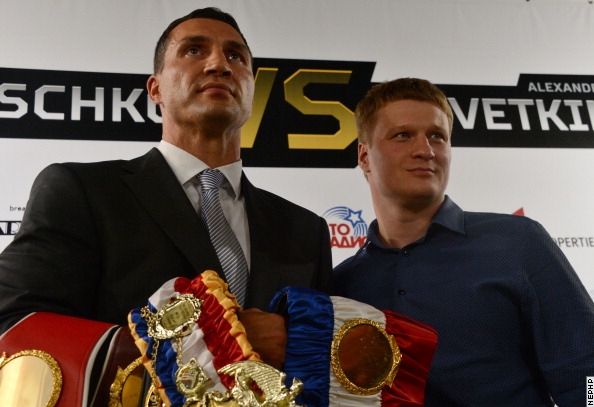 Nearly 150 reporters from all over the globe (but mostly from Moscow, which surely doesn’t come as surprise) filled in the Mary Jane restaurant on  the shores of the Moscow River to see the kick-off for the heavyweight showdown between the reigning Super WBA, IBF, WBO and IBO champion Wladimir Klitschko and his perennial challenger and WBA (“regular”) titleholder Alexander Povetkin. The fight between two Olympic super heavyweight gold medalists is penciled to take place on October 5 at Olimpiyskiy Palace of Sports under the Andrey Ryabinskiy promotion, represented by the bid-winner Hrunov Promotions.

The presser took over an hour with local media being especially active not only in boxing Q&A but also asking the competitors about some stuff outside the pugilism. Both parties were friendly and polite but Team Povetkin looked a bit too nervous in comparison with the relaxed champion. While Wladimir was as articulate as usual, Alexander, his new wife sitting in a front row against the presidium (alongside Chris Meyer of Sauerland Event and his former guider Vladimir Hryunov), was short on words – also as usual.

Here are the most interesting quotes.

Wladimir Klitschko: “I’m very glad to greet you here in Moscow. My elder brother Vitali already fought in the Russian capital a year ago, and now it’s my turn and I’m totally delighted to battle Alexander in his homeland. A record-breaking array of reporters tells me how big this contest really is. I’m definitely pumped up and willing to show my best game at the fight time”.

About his trainer, “I continue working with Johnathon Banks. Well, his recent fight (against Seth Mitchell) wasn’t a success to say the least but he is a much better trainer than he is a boxer. His help was very valuable to me (as were his advices), when Manny (Steward) has gone. He is doing a great job, and he will be a chief coach in my corner on Oct. 5”.

About his attitude to Povetkin and drawing black eyes on Alexander’s silhouette three years ago, “It was what it was. When Team Povetkin didn’t appear for a presser in Germany, I was really embarrassed. Really! I don’t have any bad feelings to Alexander and there’s no bad blood between me and him. I wish him all the best during his training camp. I see he is trimmed and ready for the biggest fight of his career, and I would like to see the top Povetkin when the bell rings”.

About his strongest opponent: “I couldn’t point out a single one. Alexander Povetkin will definitely be one of the most dangerous. I remember him fighting in one of my undercards (against Friday Ahunanya before Wladimir vs. Chris Byrd). Manny Steward came to me soon thereafter and told me: “Look at this guy! He is a good boxer, and he very well can be your opponent somewhere in future”. Every Olympic super heavyweight gold medalist looks after his successors and I’m no exception”

About his feelings towards Povetkin, “There’s no confrontation. Not at all. I was rooting for Alexander during his bout versus Andrzej Wawrzyk. I was very impressed with his boxing”.

About a rematch clause in the contract, “Sorry, such things are parts of the fight agreement, and I cannot disclose such details”.

About his attitude to Klitschko and him drawing black eyes on Alexander’s silhouette three years ago, “It doesn’t bother me at all. I’m not into it. I think he was a bit disappointed but I’m not taking this for an offense. I respect Wladimir”.

About his preparations, “The first stage, which has taken place in Kyrgyzstan, is over. My team is well equipped and I also hope that Kostya Tszyu will join it at one of the moments”.

About his feelings towards Wladimir, “To tell the truth, I consider Russian, Belarussian and Ukrainian peoples to be parts of a single nation. I always root for fraternal Slavic sportsmen, and Wladimir is no exception”.

Andrey Ryabinskiy – “I’m totally delighted that we have brought this fight to Moscow. It’s not about money. 24 billions isn’t what I’m complaining for. It’s about developing Russian boxing into a real power across the world. Please, come on Oct. 5 to see a fantastic event”

About the undercard, “It’ll be announced later, but cruiserweights Rakhim Chakhkiev (16-1, 12 KOs) and Grigory Drozd (36-1, 25 KOs) will definitely be parts of it. I’m also working to bring former WBA heavyweight champion Ruslan Chagaev (31-2-1, 20 KOs) to the event”.

About anti-doping policy and about NADA taking the drug tests, “I’m fully ensured that NADA specialists are of the highest class and dignity. But I cannot reveal any details of the anti-doping policy due to non-disclosure agreement”.

About the certain local sanctioning body, working the bout, “This is the same with this one – I cannot reveal this item of our agreement”.

About tickets, “They are coming for sale in about a week. I ordered that prices would vary not a bit. Everyone should have a chance to see a fight of this caliber regardless of its wealth. Hence there will be not only high-priced but also cheap tickets for everymen”.

About worldwide broadcast, “We have reached an agreement with HBO to air this fight overseas. It’ll be also televised by RTL in Germany and I’m looking for more TV channels around the globe to by this event in the nearest future”.