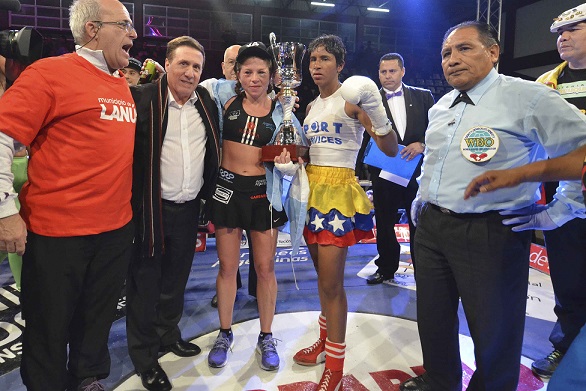 Duer, popularly known as “The Turk,” defeated Ana Maria Lozano of Venezuela by unanimous decision on Friday night in Lanus, a city in Buenos Aires Province, to take the crown in the 115- to 118-pound class. After the 10 rounds, two judges scored the bout 98-92, and one had it 97-93.

The Jewish boxer raised her professional record to 17-3.

Duer, 35, was the WBO super flyweight champion, for fighters weighing 112 pounds to 115 pounds — a title she defended six times. She is the first Jewish woman to hold a WBO crown.

The country’s National Public Television covered the fight live and broadcast it free under a federal program designed to make satellite television more accessible, including in high definition.

Duer this year began to announce boxing on National Public Television, and she will be in Las Vegas on Sept.  13 as the special commentator for Argentine TV at the rematch between American boxer Floyd Mayweather and the Argentine Marcos Maidana.

Duer, a favorite in Argentina, is the daughter of Syrian immigrants. She attended the Jaim Najman Bialik Primary School in Buenos Aires and spent more than a month in Israel in her younger years working on a kibbutz and touring the country.