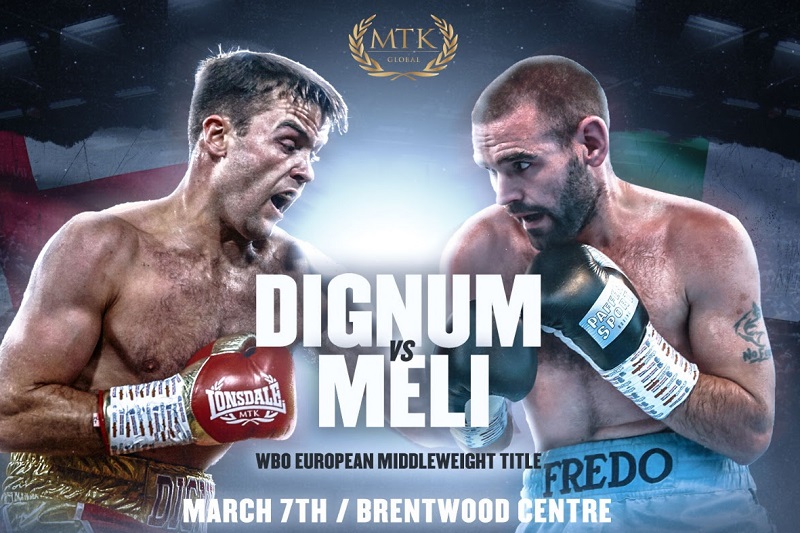 Unbeaten fighters will collide when Danny Dignum faces Alfredo Meli on a huge #MTKFightNight at the Brentwood Centre on March 7.

The event will be live in the US on ESPN+ in association with Top Rank, and worldwide on IFL TV, and sees Dignum (12-0, 6 KOs) defend his WBO European Middleweight belt against Meli (17-0-1, 5 KOs).

Dignum said: “I’m really looking forward to this fight. Alfredo has a very good record on paper so it’s a real 50/50 bout.

“I’ve not seen anything of him to be honest. My coach watched his last fight and said he comes forward a lot and has a high work rate which could suit me, as I like someone that comes forward.

“His last opponent was a good fighter so he’s been in there with some good opposition and he also boxed Conrad Cummings a few years back. I won’t be taking anything away from both of our results with Cummings as his fight was a long time ago, so I’m preparing for my hardest fight to date.”

Meli added: “I’m really looking forward to this fight with Danny Dignum. He has the WBO European title so a win here can catapult me high into the WBO rankings, so it’s a great opportunity.

“I was pleased with the win in my last fight against an unbeaten fighter. It was a massive card to be a part of in Belfast and now I’m excited to compete on another huge #MTKFightNight.”

It is the latest massive #MTKFightNight to take place at the Brentwood Centre, with a number of huge names competing at the venue throughout 2019.

Tickets for the event are now on sale, with more fantastic fights set to be added in the coming days and week.