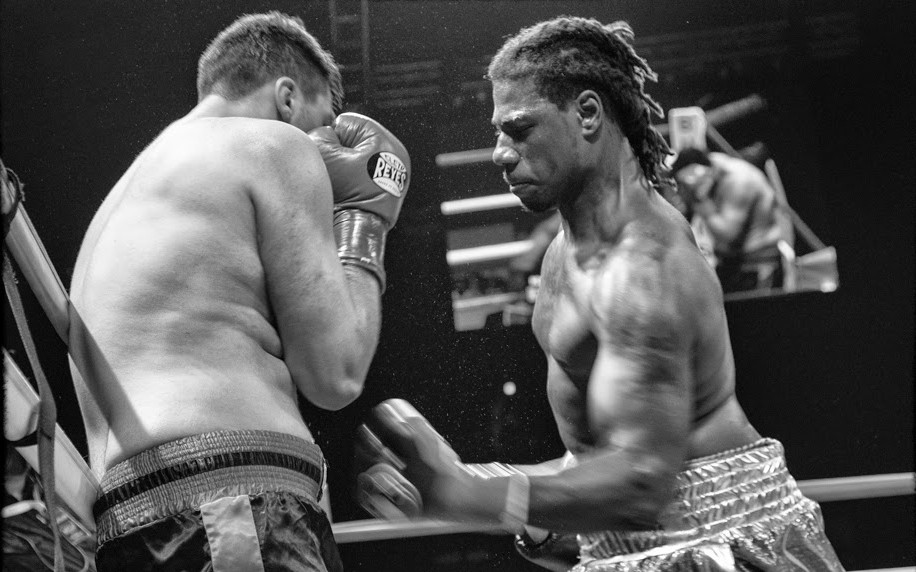 By Rocky Morales and Miguel Maravilla at ringside –

“Prince” Charles Martin (16-0, 14 KOs) impressively dismantled and knocked out previously undefeated Alexander “The Great” Flores (14-1, 12 KOs) to win the vacant NABO heavyweight title on Wednesday night at the Barker Hanger in Santa Monica, California. Martin was in command from the beginning and dropped Flores hard at the end of the third round with a straight left cross. Martin then finished Flores off with a hard left cross to the body followed by a right hook that crumpled Flores to the canvas where he was counted out at 1:14 of the fourth round.

Former WBA/WBO middleweight titlist, Hassan N’Dam N’Jimkam (30-1, 18KO) used his superior hand speed and footwork to win a unanimous decision victory over three time world title challenger, Fulgencio Zuniga (26-9-1, 23KO). Zuniga proved to be a tough customer but the Colombian also showed every bit of his 36 years of age in dropping the fourth of his last five bouts. N’Dam N’Jimkam, meanwhile, wins his third fight in a row following losing his middleweight title to Peter “Kid Chocolate” Quillin. All three judges scored the bout 100-90 in favor of the Cameroonian fighter, N’Dam N’Jikam.

In an All-African ten round welterweight affair, it was South Africa over West Africa as southpaw Chris “The Heat” Van Heerden (21-1-1, 11KO) won a workmanlike split decision over Ghana native, “Sugar” Ray Narh (26-5, 21KO). Narh was simply unable to cope with the busy punching and forward charging Van Heerden. Although Van Heerden seemed to be the clear cut victor, he had to settle for the split decision as judges saw the bout 96-94, 96-94 and an inexplicable 93-97 (in favor of Narh).

Yunier “The Knockout Artist” Dorticos (17-0, 17 KOs) lived up to his nickname by destroying former world challenger, Eric “Danger” Fields (24-3, 16 KOs) by way of a crushing knockout at 2:58 of the fourth round. Both fighters were down in the first round, Dorticos from a looping right hand and Fields from a straight right cross. Dorticos then went into stalking mode for the remainder of the bout and had Fields on the run until finally catching him with a perfect 1-2 combo, with the right hand dropping Fields for the count. With the victory, Dorticos retains the interim WBA Fedelatin cruiserweight title and wins the vacant USBA cruiserweight title.

In opening bout action, a scheduled eight round middleweight bout, Louis Rose (10-1-1, 3 KOs) controlled the action in a competitive bout and finally got a dramatic TKO victory at 2:58 of the final round over tough as nails Emmanuel Ledezma (12-2-2, 2 KOs). A double right hand staggered Ledezma and a left hook dropped him against the ropes. The referee deemed Ledezma unable to continue and wisely waved off the bout with just two seconds remaining.

The fireworks began before the first bout even began as the crowd was treated to a performance by the UCLA Marching Band and the National Anthem performed by the guitarist from the iconic punk rock band, The Sex Pistols, Steve Jones.