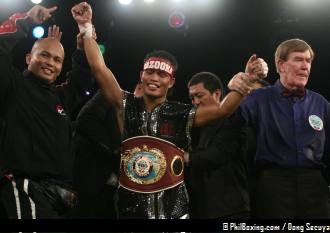 AJ Banal’s long wait for a second crack at a world title is finally over.

After months of tedious negotiations, ALA Promotions finally sealed a match that Banal has long been itching for as the hard-hitting Cebuano boxer takes on Thailand’s Pungluang Sor Singyu for the World Boxing Organization (WBO) bantamweight title on Oct. 20 at the posh Mall of Asia Arena.

The highly-anticipated match dubbed as “Philippines vs. The World” will serve as the 17th installment of the highly successful Pinoy Pride series.

“The negotiation started in February. It was a back and forth negotiation. It took us so much effort and investment to pull this one off. It is quite an investment to bring this fight here,” said ALA Promotions president Michael Aldeguer in a press conference yesterday at the City Sports Club-Cebu Gym.

BAUTISTA IN THE UNDERCARD

Bringing the fight in the country wasn’t easy since the OneSongchai Promotions, the biggest boxing promotional outfit in Thailand, was also capable of hosting the fight, said Aldeguer.

The deal was only sealed last Tuesday night.

Today marks the fourth year anniversary of Banal’s heart-rending loss to Panama’s Rafael Concepcion on July 26, 2008 where the latter stopped him with a 10th round knockout at the Cebu Coliseum.

That loss, his only defeat, showed that it will take more than a homecourt advantage for Banal o win a world title.

MORE MATUREThe 23-year-old Banal has 28 wins spiked by 20 knockouts, one loss and one draw.

“I am more mature now. That time, all I think was to knockout my opponent. I was over aggressive,” said Banal referring to his previous fight against Concepcion.

Against Singyu, Banal said he has to pace himself and prepare for a long haul.

“Stamina was my problem against Concepcion. I have been working to improve my stamina and pacing myself will be very important. I have been waiting for this and I will do my best to win the world title,” said Banal, who has strung up 11 straight wins since that loss to Concepcion.

Banal said playing in front of his countrymen also has its disadvantage.

“Sometimes I get overwhelmed with the crowd. So this upcoming fight, perhaps I’ll stay in the bleacher before my fight to feel the environment and get used to it,” said Banal, the reigning WBO Asia-Pacific bantamweight champion.

“We have watched two tapes of Singyu’s previous fights. He seemed vulnerable to body shots but we will further study his style. We are looking for a tape where he fought a southpaw,” said Banal’s trainer Edmund Villamor.

The southpaw Banal, who recently made it to the top 10 of Ring Magazine’s ranking in the bantamweight division, is the WBO world No. 1 bantamweight contender while Singyu is rated No. 2, making the upcoming fight a surefire hit.

The orthodox Thai fighter has won his last 19 fights and hasn’t tasted defeat since losing to Stephane Jamoye via split decision in May 9, 2009.