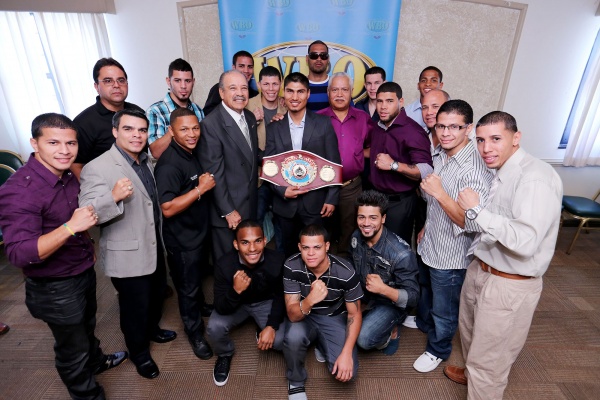 “We gave the belt to Garcia, one of the best young champions and an example to the youth. We are proud to have Mikey Garcia as our champion. This (Garcia) is the man who beat the man, he (Garcia) beat Orlando Salido, who beat Juanma Lopez, who beat Daniel Ponce de Leon and Steven Luevano”.

Garcia (31-0, 26 KOs), who was together with his father and trainer Eduardo Garcia, said that he feel so good to be in Puerto Rico again. Garcia fought in the island last year when he knocked out Bernabe Concepcion.

“I’m very happy to be in Puerto Rico, a great place and I feel so grateful for this event. Garcia said. “This (the WBO) is a great entity, one of the best now and I’m very proud to be a world champion and to receive my belt today in Puerto Rico with all these people here”.

Carl Moretti, Top Rank Vice-President, who was in the activity representing this company, said that “Garcia is one of the best young fighter and we expect great things in the future”.