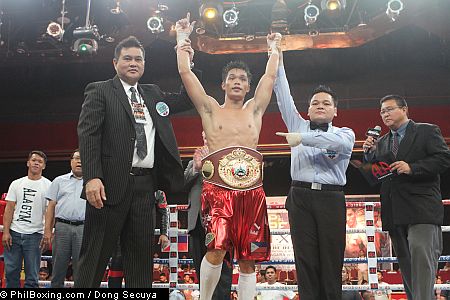 Jason Pagara will make the second defence of his WBO International Light Welterweight title against Albert Herrera in the main event of Pinoy Pride 20 at the Cebu Waterfront Hotel on May 25th.

Pagara (30-2) is one of the top prospects fighting out of the ALA gym and won the belt by beating Rosbel Montoya in a rematch last year. He has won the majority of his recent fights with early KOs and will be looking to continue that streak against Herrera (20-1), a Mexican who won the lightly regarded WBC Mundo Hispano lightweight title in 2011.

Also on the card will be Pagara’s ALA Gym stable mates Jimrex Jaca and Genesis Servania with the former going up against another Mexican in a 140 lbs match up and the latter taking on an opponent from Indonesia in a super bantamweight fight.

Jaca (37-6-3) has been resurgent of late, bouncing back from three straight losses in 2008, and will be looking for his tenth consecutive win when he takes on Jose Emilio Perea (22-14-2) in a fight which will have the vacant WBO Oriental light welterweight title at stake.

Servania is penciled in for the July 27th Top Rank card in Macau and will be hoping to emerge unscathed from his matchup with Isack Junior. The Indonesian has lost his last couple of fights and will be moving up two weight classes to face the reigning WBO Asia Pacific super bantamweight champion in a non title bout.

Pinoy Pride is firmly established as the premier boxing promotion in the Philippines and has provided a platform for ALA Boxing Gym standouts such as Milan Melindo, AJ Banal, Donnie Nietes and Merlito Sabillo to perform in front of the Filipino fans.