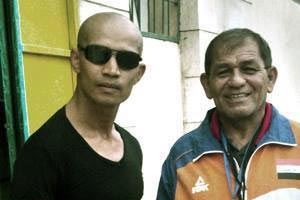 Undefeated strawweight boxer Ali Raymi (20-0, 20 KOs) broke Tyrone Brunson’s record of 19 consecutive first round knockouts at the beginning of a pro career, when he stopped Akram Jafwi (5-1) in the first round last Sunday at the 22 May Sports Stadium in Sana’a, Yemen. Raymi, 39, who speaks excellent English, has a huge personality to match his aggressive take no prisoners body attack that none of his opponents have been able to survive three minutes against. While none of his victims to date have been world class, Raymi is now ranked by the WBC at #15 and the WBO at #12, which would qualify him for a world title shot against WBC champion Xiong Zhao Zhong or WBO champion Merlito Sabillo. Should either of those world champions choose to make a defense against Raymi, it would certainly bring much needed attention to the 105lb division.

Ali, first of all congratulations for entering the boxing history books. You have scored 20 first round knockouts, the new record. Even so, as you can probably guess, there are many skeptics out there that say that there is no boxing tradition in Yemen and that all your opponents have been Yemenis. What do you say to these people?

Thanks Robert, I congratulate you for being my first interview and it only makes me more obligated to achieve boxing immortality, so you can be known as the first writer to interview me. I didn’t enter boxing history yet, the record you are referring to insults me more than anything. I didn’t KO people to challenge Tyrone “Biggums.” I shouldn’t be put in the same sentence with him. That said, I also don’t want to be compared to the great Edwin Valero because we are two different animals. Edwin Valero was more skilled than I am, but many times he chose to lure opponents into war like I always do.

I agree the state of boxing is pathetic in Yemen, most boxers are simply [Naseem] Hamed stylists or plain basic boxers. This is because they’ve been trained by a Cuban trainer and an Iraqi trainer, Taha Bidani, who come from a strict amateur background. Also about half of my opponents were African.

Any echo of your feat in Yemen? Are you a public figure/hero over there?

In Yemen I am pretty much unknown outside of Sana’a and the few disinterested mentions in the newspapers, mainly because promoters brought in a chinny Belgian Yemeni and called him a champion. He was supposed to box, but I was around so they changed it into kickboxing. Now Yemenis rank this fragile guy as a hero, they praised him on Al Jazeera TV.

Now they are bringing in Thai Samson, a guy few heard of! They already set up a win/win scenario in the boxrec forum. They hope he beats me, but when I stomp this name renter, they will say he was rusty or bribed by me, although everybody in Yemen knows I never have money and whatever money I make I give away immediately. Bravery and generosity go hand in hand and the opposite is true.

In Yemen they want me to be someone I am not.

Very little is known about pro boxing in Yemen. Boxing activity over there is like everywhere with regular shows, promoters, sponsors, TV coverage, fans paying at the gate? Do you receive the backing of local sponsors?

This whole money issue never interested me, I am a fighter not a businessman! I come to break down people, when I put gloves on I enter a trance. I don’t see or feel anything around me, except my enemy.

I refuse to sign any contract, lots of offers came, some are from good guys. I have to mention Mr. Welliver from the USA because he was the first to contact me and he seemed to be a good guy. He wanted me to fight Zhong, but I had to sign a longterm contract with his promoter which is out of the question. I never had a superior to me outside the ring or inside the ring, I don’t answer to anybody. I was offered a commercial for an energy drink to be done with USA top model Kate Upton, but they wanted me to gain more weight for the commercial and promote a product name that I didn’t really support. I also got lots of offers inside boxing and outside boxing from all over the world. Some were eccentric, but I didn’t get offended as I understand where they are coming from.

You are 39, Ali, a rather late age for boxing. You turned pro at 37. Can we have an idea of your trajectory? Did you have an amateur background? How did you get into the game? Is boxing your only profession? Who is your trainer?

My style is intentionally natural, I will fight till the last moment of my biological existence. I don’t like discussing my pre-boxing past as I feel it will be considered inappropriately semi-legendary. So let’s say I’ve always been exceptionally fit. I credit Captain Nasr Al Code from the district of Mansoura in Aden for indoctrinating body punching ideology. He was expelled out of Yemen Amateur Boxing because he was eccentric and drank alcohol. He told me I have to change sports and become a boxer because I am the only boxer who can implement his war ideology. I vindicated him by KOing everybody in the amateurs in Yemen, becoming the National Champion of Yemen up until 2007. It’s still on record in the 26 September Yemen Arabic Newspaper. Lazy critics who claim I came out of nowhere are just busy soliciting more bribes instead of doing simple research using Google Translator! I am the masterpiece of Captain Nasr, I was 52 KG and he made me spar with heavyweights. I dominated all lower divisions up to 57 KG and pretty much KOed anybody regardless of weight in Yemen. Nasr is my first trainer, but I never saw him since 2007. I went back to Aden and they said he vanished. He is well known in Aden, but can’t be located now and I hope that I have him in my corner for my title defenses.

For now I keep Taha Bidani in my corner. I had problems with Taha in the amateurs because I never threw jabs, but I gained his respect after I destroyed all his fighters using the style he hated so much.

After 2007, I freelanced in a tourist complex next to the American Embassy. I mainly guarded private parties, most those entertained were diplomats and adventurers. In those days I made lots of friends from all over the world. By 2008 I was entertaining a select few by fighting in private events. Many fights ended violently as those opponents were trained to just do that and we fought bare knuckles with no rounds, I remained undefeated and at this period I got most my scars that are visible on my face. It was the only entertainment my friends enjoyed. Those became the base of my international fans when I turned pro.

In 2011 I heard an Iraqi light heavyweight Boxer was going to fight pro, so I challenged him. The trainer knew I will KO him, so they gave me a fight vs a Yemeni pro-debut. At that time I was the heaviest at 54 kilo (118 lbs.). I KOed the guy and the Iraqi light heavyweight fought like a bum for four rounds. He avoided more fights because I always enjoyed punking him in front of his team. I fought three more times against doubters and the people behind them, demolishing them with ease. In May 2011, boxing slowed down, cause of turmoil and anarchy at that time. The parties ended, the few foreigners left and the buildings that serve alcohol became bullet ridden. I was not allowed to box they gave me various excuses and was in and out of jail because of my work in the Great Wall Restaurant. My fifth fight was after my layoff. I was supposed to lose. They trained Gadsi specifically to reach the decision. I took his best punches on my chin early on, countered with non-stop body shots, the ref kept breaking my body punching combos to help Gadsi survive, but I forced the KO few seconds before the end of the round. I felt his ribs crack by the KO punch and he never met me again.

I am opposed in Yemen, notice in one of the GIF videos you will see the ref trying to help Ahmad Saeed get back his breath. They kept breaking my combinations, a technique they used in most the fights. They always broke my body attack in the middle of combinations! They only posted videos of Africans, because they don’t want to show the Yemeni opponents I destroyed.

What do you consider are your main strengths as a boxer?

My chin is titanium, my fists are uranium, I don’t kneel to anybody, because GOD is within me. I always walk in the ring with no family or friends or anything to be missed. My only responsibility is to make sure I don’t let down my fans worldwide. Champions who don’t want to be KOed brutally, have a choice to vacate the belts and move to another division or retire, I am at 105 lbs eternally.

I never gain weight, the highest I reach is 118lbs/54KG although I usually KO much more heavier guys in all fights in the pros and before, when I train hard I reach as low as 103lbs/46KG. I feel best at 105lbs, the gloves are lighter so the velocity increased even more from the amateurs. People still don’t understand that fighting bigger guys is easier for me than the 105lbs. I will randomly KO hype job titleholders whenever I see one without leaving 105.

What boxers in the 105 lb division would you like to fight in the near future? Would you consider fighting outside Yemen?

I obviously prefer undefeated fighters, but I need Zhong’s WBC Green belt, also the WBO ranks me at #12 so I can fight Merlito Sabillo. ALA Boxing are boxing experts, so if they think Merlito Sabillo can survive my power they will give me a title shot. As I know I will never ever win a decision, so my mission is knockout. I train for eternal warfare. I harass boxing and martial arts gyms and go spar by force with bigger guys. I always stay in the kill zone and enforce war. It’s always my foes who back up regardless of how big or strong they are. Body punching is an art that very few boxers fully understand, every punch I throw is stronger than the punch that KOed De La Hoya. I will fight anywhere. It’s all the same I only can win by KO in Yemen or outside of Yemen.

Considering the geography of Yemen, which regional belt could you fight for?

I am interested in the LEGIT belts. I thank everybody who tried to help me win other belts. However, my goal is undisputed supremacy, that means WBC + WBO + WBA + IBF and that’s what it’s all about.

I hope the WBA renames the inferior belts into something else. I will be very pissed when I become the undisputed champion and there is some loser I just KOed claiming to be the WBA champion also! The fans deserve clarity!