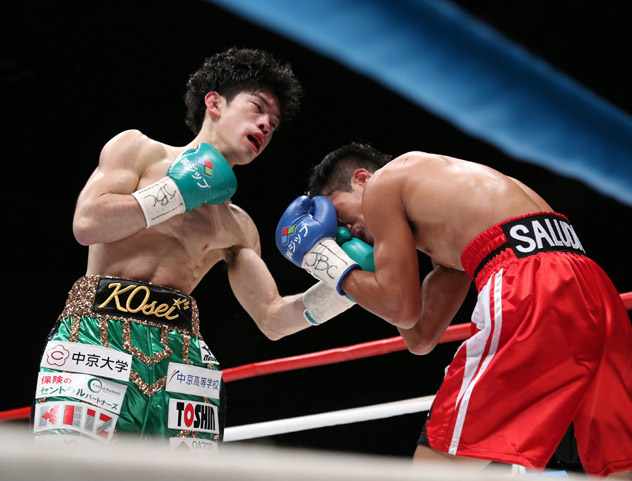 The 25-year-old Saludar (11-2, 9 knockouts) was ahead by the tallies of 50-44 on two scorecards and 49-45 on the third, according to a copy of the cards posted on the Facebook page of Saludar’s promotional company, ALA Promotions.

That was all erased when Tanaka, THE RING’s No. 4 fighter at 105 pounds and an economics student at Chukyo University, dropped Saludar for the 10 count in round six with a left hook to the body. The time of stoppage was 2:15.

The win was the first defense of the WBO title which Tanaka (6-0, 3 KOs) won in May with a unanimous decision over Julian Yedras. Tanaka, 20, told RING earlier this week that he intended to move up in weight in the future. 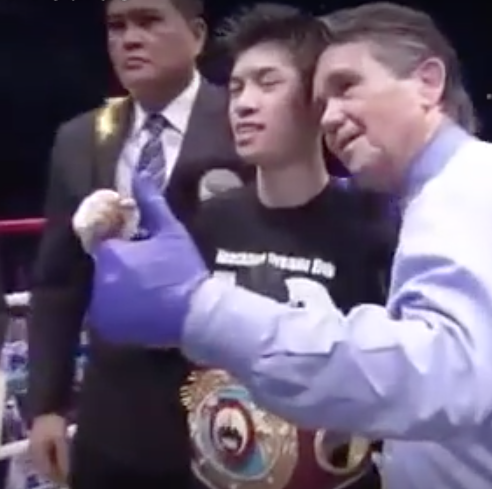 When Kosei Tanaka won the vacant WBO strawweight title in May outpointing Julian Yedras. The victory made him the youngest major world titleholder in boxing. Tanaka turned 20 two weeks after beating his Mexican rival by unanimous decision.

After seven months Tanaka (5-0, 2 knockouts) looks to make a first defense of his belt when he faces the WBO’s No. 4-ranked contender Vic Saludar (11-1, 9 KOs) on Thursday evening at the Aichi Prefectural Gym in Nagoya, Japan.

While the uber-talented youngster is still in college he isn’t looking past his heavy-handed Filipino challenger. Tanaka has many goals in the sport to achieve, including going up in weight.

“I have various kinds of goals in boxing,” Tanaka told RingTV.com through Tomoyuki Kataoka. “I am still young, and therefore, very ambitious in my own future. I do not have any actual clear goals to talk about other than becoming a globally popular boxer, many people will cheer for.”

His performances in the ring to date have certainly caught the attention of the Japanese boxing scene and if his stock continues to rise he will doubtlessly become more popular in the West much like his countryman Naoya Inoue.

Former WBC junior featherweight champion Kiyoshi Hatanaka is Tanaka’s promoter/manager and believes his client can go a long way in the sport.

“Kosei has good mind, good technique and good physical ability as a boxer and, furthermore, he is very clever though he is still young,” Hatanaka said. “I have managed a boxing gym in Nagoya – the third (largest) city in Japan – for a long time, however, I have never seen such an excellent talent as Kosei.

“Since he is still young, his body is growing every day. Therefore, it will be difficult for him to maintain his weight of 105 pounds. However, if he gains his experience as a professional boxer and he can keep up his own appropriate weight of the moment, he will be able to exercise his talent and strength frighteningly. Boxing’s ‘Dream Boy’ will give his best efforts every day to make his dream happen. I am convinced that his honor will spread all around the world in the near future.”

Here’s what Tanaka had to say when RingTV.com spoke to him ahead of his maiden title defense.

RingTV.com – What are your thoughts on facing Saludar?

Kosei Tanaka – This bout will seem to become a very thrilling one, where both fighters can use their own speed and power.

RTV – What do you feel he brings to this fight in terms of strengths and weaknesses?

KT – His strengths are sharp punches and one-two punches. However, his weakness is a lack of experience for a 12-round match.

RTV – You won the WBO title back in May, outpointing Julian Yedras. Tell us about that fight.

KT – He was a great boxer with a good chin and strong mind, and therefore, I was not able to knock him out. It was very tough during the fight.

RTV – What did it mean to you personally when they announced the decision and you knew you were the champion?

KT – At the moment, my own perspective in my head had changed. Furthermore, the victory made me raise my own sights for boxing.

RTV – Did it change anything in your life?

KT – The victory gave me a license to fight against various strong boxers all around the world from now on.

RTV – There will have been seven months between the Yedras fight and the Saludar fight. What have you done in that time and why were you out of action for so long?

KT – It was just a result of incidental encounter of various circumstances. I was able to use the seven-month period as a chance to set my new aim, to prepare restarting and to have my eyes on myself and boxing.

RTV – It has been rumoured that you would unify against the experienced IBF champion Katsunari Takayama, what is the latest with regards that fight? Is the two of you fighting on the same card a prelude to a fight next year?

KT – The plan for the unification bout with Takayama has collapsed, and therefore, at the present, I do not have any comment on the bout. It might depend on the circumstances in the future.

RTV – You’re only 20, and big for a strawweight, but how much longer do you feel you can fight at 105-pounds?

KT – I will check it again at my next bout; however, I have my sights set on going up to heavier (weight classes).

RTV – You’re from Tajimi, in Gifu, what was your youth like and how did you become interested in and take up boxing?

KT – I started karate when I was in Kindergarten. I loved practicing Karate every day and I was eager to become a better karate player than any of my friends. I commenced boxing when I was in junior high school in order to improve my karate skill. I then realized I was better at boxing than karate.

RTV – Away from boxing what would you tell us about your life?

KT – I love to eat any food. I do not have any specific hobby other than boxing. I always concentrate my attention on boxing, and therefore, I am not good at studying at my university. I am still a student at Chukyo University in Nagoya. I study Economics.

RTV – In closing do you have a message for Saludar?

KT – Let’s have a great bout at the best physical conditions.