Results:   The WBO Jr. Featherweight Champion Jessie Magdaleno retained the title against Adeilson Dos Santos by KO’ed in the second round. 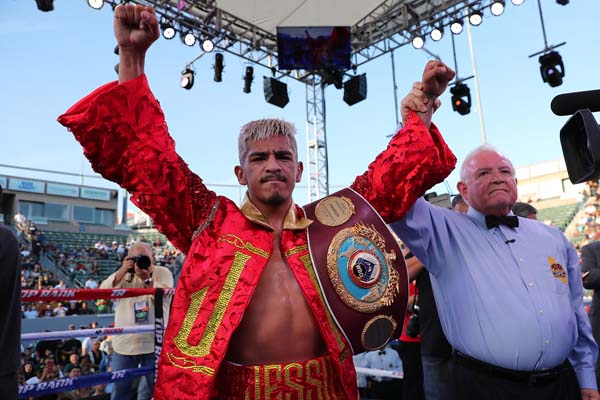 By Rocky Morales at ringside

The southpaw Magdaleno outboxed Dos Santos in the opening round but then picked things up in the second round, staggering Dos Santos with a hard left cross and dropping him with a follow-up right hook. From there, Dos Santos held on for dear life and nearly made it out of the round but another well landed right cross dropped him for a second time. The referee, to the mild protest of Dos Santos stopped the bout seemingly because Dos Santos just wasn’t fighting back rather than Dos Santos being unable to continue.

Time of the knockout was 2:51 of the second round and, with the win, Magdaleno successfully defends and retains the WBO Jr. Featherweight championship. After the bout, Magdaleno called out fellow champions Guillermo Rigondeaux (WBA) and Rey Vargas (WBC) to face him in a title unification bout. Opening up the press conference was Hall of Fame Promoter Bob Arum of Top Rank.

“The fighters we will be showcasing on April 22nd are the brightest of Stars,” Arum said.

Oscar Valdez and his team introduced by manager Frank Espinoza

“Headlining this event means a lot to me. We put in the time and working hard for this fight. Miguel Marriaga is a tough fighter. We will do whatever it is to come out on top. Whatever I have to do to win, I will do that night,” Valdez said.

“My boys will be ready on April 22nd. They said Oscar hasn’t fought a hard puncher but I don’t think they have faced a fighter like Oscar before,” Trainer Manny Robles said.

“April 22nd, Valdez defends his title against Marriaga. Oscar welcomes him and is up for the challenge. On April 22nd you don’t want to miss this fight,” Manger Frank Espinoza

Valdez will be making his second defense of his title against NABO champion and number one contender Miguel Marriaga (25-1, 21 KOs) of Columbia. Marriaga and his team were also present.

“We have been working and now the time has come. I am well prepared for this fight and will come in 100 percent for this fight,” Marriaga said.

“Valdez and Marriaga will be a fight to remember. Stub Hub Center has always had great fights and this will live up to that. We are looking forward to it,” Manager Ruben Zavala said.

Gilberto Ramirez will be making the first defense of his WBO super middleweight title against Maksim Bursak (33-4-1, 15 KOs), of Kiev, Ukraine.

“We have a lot of confidence in Gilberto that this will be a good year. April 22nd, he will comeback to please the fans. This will be his year,” Manager Jesus Zappari said.

“It feels good to be back and defend my title. April 22nd you will see another great Magdaleno. We are here to give everyone what they want to see, a great night of boxing,” Magdaleno said.

“Let me introduce you to a young man that will be a superstar the way Ray Leonard and Oscar De La Hoya were,” Bob Arum said in introducing Stevenson to the local media.

“I am excited to be making my debut and I cant wait to entertain my fans,” Shakur Stevenson said.