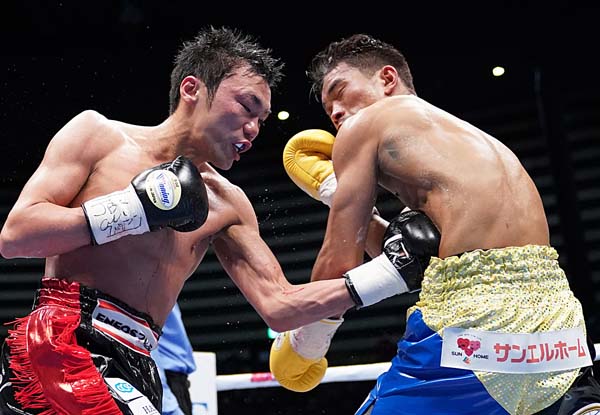 Igarashi, recently a frequent bleeder from his scar tissues, had red ribbon streaming from a cut over the left eyebrow in the third and from another over the right optic in the sixth. He was forced to go on fighting in a bloody mess. Kimura, 29, recklessly kept going forward with roundhouse shots, while Igarashi, 33, only kept circling and retreating without throwing effective punches to the onrushing champ.

Kimura showed his best in the eighth, when he caught the fading challenger with wild left hooks and looping right hooks to have him retreating to the ropes. The fatal ninth saw Kimura fully open his engine and batter him to the ropes with a flurry of punches, when the referee Katsuhiko Nakamura (Japan) wisely waved it off to save the loser. Prior to the stoppage, the official tallies were lopsided: Adalaide Bird (US) 80-72, Luis Ruiz (Puerto Rico) and Takeshi Shimakawa (Japan) both 79-73, all in favor of the defending champ.

Igarashi was a sole representative in boxing from Japan for the Olympic Games in Athens in 2004. He turned professional in Teiken Gym, the oldest stable here which has produced many champions, in 2006. The fast-handed southpaw once nicknamed “Supersonic” wrested the WBC flyweight belt by outspeeding and outfighting Filipino Sonny Boy Jaro and defended it against Argentine Nestor Narvaes, the younger brother of Omar, in 2012. But he, in his second defense, yielded it to a veteran compatriot with a fluctuating career Akira Yaegashi by an upset verdict 2013. He apparently made a mistake as he failed to utilize his potential speed on hand and foot but too recklessly swapped punches toe-to-toe only to be outpunched by the much shorter Yaegashi. Since then, four years and eight months passed for Igarashi to enter the squared circle in order to regain the world throne this time.

Sho Kimura, less talented than Igarashi on amateur credentials, began to learn boxing at the age of fifteen and only briefly boxed some contests in high school. He resumed boxing at 22, when he tasted a bitter defeat, a first round knockout by Shosuke Oji in his pro debut in 2013. Since then, Sho kept winning including a couple of draws. Technically not so superb, nor so power-punching, Kimura was only one of those club fighters. But his manager/trainer Masayuki Ariyoshi of Aoki Gym opened a way for Sho to acquire the vacant WBO Asia Pacific flyweight belt by eking out a majority decision over compatriot Masahiro Sakamoto in November of the previous year.

Rated by the WBO, Kimura was fortunately given an opportunity to face Chinese hero Shiming Zou with his WBO 112-pound belt on the line this July. Before his departure for Shanghai no one in Japan expected him to bring back the world belt by dethroning such a formidable champ as Zou, two-time Olympic gold medalist. But so did he. Trailing on points (94-96, 93-97 for Zou and 96-94 for Kimura), Sho made a do-or-die attack to the fading champ, desperately battered the Chinese and finally wore him down en route to an eleventh-round TKO loss. He’s truly a Cinderella man.

Even after his unexpected coronation Sho lives alone in a small apartment, works to deliver liquor from 7 AM to 3 PM and then regularly train at the Aoki Gym afterward.

The man who gave him only a defeat, Shosuke Oji (who retired after one pro fight with Kimura), was a southpaw. Kimura wasn’t good at fighting a southpaw opponent. After he decided to fight the southpaw mandatory challenger Igarashi, Kimura went abroad to train at Hong Kong and Thailand, where he had some 300 sparring sessions exclusively with southpaw partners. His efforts paid off well.

The badly bleeding and crestfallen loser Igarashi declared a farewell to boxing after this bitter defeat, saying, “I’m happy to be able to fight for the world championship in the end of my career. I already decided before the fight that I’ll hang up gloves if beaten.”

Boxing is sometimes a miniature of life. A year ago Sho Kimura was never expected to be a world champion, but once he took an opportunity in Shanghai, he opened the door for fame and fortune by himself. Having defeated a couple of excellent Olympians Zou and Igarashi, he thus became a different person with good confidence in himself.