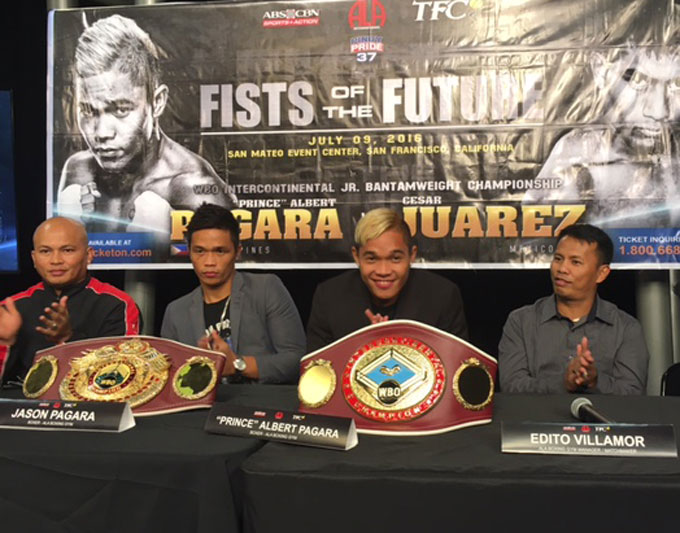 Albert Pagara: “Cesar Juarez is a strong Mexican fighter who loves to move forward and attack but I’m ready to face him. I will be ready for him. My Plan is to stick to my game plan and not fall into his, which is to have a street fight. I don’t plan to play into what the crowd wants, despite the crowd maybe being largely Hispanic. I know that the Filpino community will be there to represent as well. I’m going to stick to my game plan because I’m here to win.”

[On fighting in the USA] “With fighting here in the US the plan is for me to learn more English. Right now I understand it and I speak a little, but I know I need to fight here more and learn to speak more English.”

[On training with Freddie Roach] “It went very well. We worked on footwork and power. Freddy Roach worked with my brother and I on improving our stamina for preparation of a fight lasting twelve rounds. Not every fight is going to end in a KO. Also what I learned is that training is the key and I don’t have a fear of losing. With proper training, I feel very confident. I’m very confident with the power of my punches and if I hit my target than it better be ready.”

Jason “El Nino” Pagara: “I don’t need to say much, I’m looking for a knockout, that’s it! My specialty punch is the uppercut and he will feel it come July 9th.”

[On if he’s afraid of losing] “I have already tasted defeat before, and I’m not having that feeling again, so there isn’t anything that I’m scared of.”

Ricky Resureccion (ABS-CBN Marketing): “This is a must watch fight for the people of boxing. Pagara is an up and coming Filipino fighter. Everyone saw the fight that Cesar Juarez had against WBO super bantamweight champion Nonito Donaire and that was a fight of the year nominee. So we know this is going to be a tough fight for ‘Prince’ Albert Pagara.”

Chief trainer Edmund Villamor: [On boxing in the Philippines] “The island is very historic and boxing is one of the activities that people find passion for very quickly. You have to understand that where we are from, which is the south side of the Philippines, the region Manny Pacquiao is from, there is a lot of poverty. Lots of people look to boxing as a way out of poverty, so yes the numbers of young men trying to become fighters is quite a bit, but not all of them make it to fame and glory.”