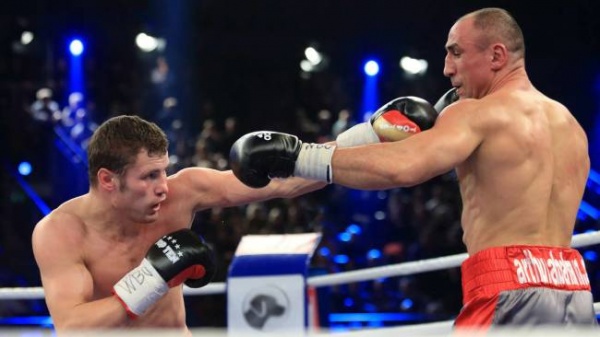 Robert Stieglitz and Arthur Abraham will be sufficiently compensated for their efforts to help break the tie in their in-ring rivalry.

A recent purse bid was won by Sport Event Steinforth (SES), Stieglitz’ promoter to earn the right to promote the ordered super middleweight title fight. With a bid of more than $3.1 millon USD, SES will serve as lead promoter for the rubber match, which is scheduled to take place March 1 in Stieglitz’ hometown of Magdeburg, Germany.

The next highest bidder was Abraham’s promoter, Sauerland Event who offered a generous $1.5 million in hopes of gaining promotional control. Results of the purse bid were revealed through Sauerland Event’s Twitter feed.

The bid amount translates to a career-high payday for Stieglitz (46-3, 26KO), who is guaranteed $2.3 million for the third defense of the super middleweight belt he won earlier this year. Abraham’s guaranteed amount comes out to roughly $800,000.

Both fighters have claime a win over the other in their respective hometowns, which for the moment favors Stieglitz heading into the potential tiebreaker. Abraham scored a career-resurrecting 12-round points win last August in his adopted hometown of Berlin, ending Stieglitz’ three-year stay as a super middleweight titlist, while himself becoming a two-division champ.

His stay near the top of the mountain wasn’t very long. Just one defense was managed by Abraham (38-4, 28KO) made one title defense before returning the favor of defending the title on the road, agreeing to face Stieglitz in Magdeburg for the rematch. Stieglitz delivered a career best performance, delivering a genuinely shocking moment for the 2013 boxing season in destroying Abraham after just three full rounds of action.

Stieglitz has since enjoyed two title defenses amidst a current four-fight win streak.

Abraham enters what could possibly serve as his last-ever title shot having won two straight. The 33-year old is 6-1 overall in life beyond the Super Six tourmanent, which – while financially beneficial – nearly ruined his career, suffering three of his four career losses over the course of the extended round robin tournament.

Jake Donovan is the Managing Editor of Boxingscene.com, as well as a member of Transnational Boxing Ratings Board, Yahoo Boxing Ratings Panel and the Boxing Writers Association of America. Twitter: @JakeNDaBox