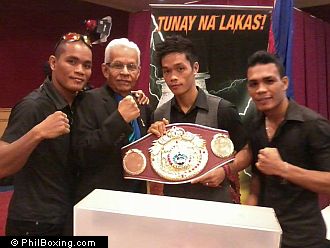 Reigning WBO International light welterweight champion Jason “El Nino” Pagara knows he faces the fight of his life against cocky but highly-credentialed Mexican warrior Aaron “Jewel” Herrera who has a fearsome record of 17 knockouts in 25 wins with only one loss but said he is not awed by the Mexican’s record.

Pagara told a pre-fight press conference at the Waterfront Hotel that he had studied tapes of Herrera along with trainer Edmund Villamor and they both believe that Herrera’s style doesn’t pose a problem.

Ranked No. 4 by the WBO a big win by Pagara would surely put him in line for a world title shot in the future according to WBO Asia Pacific vice president and fight supervisor Leon Panoncillo.

Villamor said Pagara was in probably the best shape of his life, had trained hard and was fully focused knowing the importance of an impressive victory.

But, if Herrera is to believed, it won’t be easy. The Mexican who is regarded as a devastating puncher is coming off back-to-back first round stoppages, scoring a 1st round knockout of experienced Jorge “Tigre” Pimentel and putting him away with vicious hook to the liver last July 21 after scoring a 1st round TKO over Zaid “The Terminator” Zavaleta on April 21, 2012.

Herrera said he had seen some of Pagara’s fights but was not impressed. He said he is two hundred percent ready is confident of winning since “this is the first time that he (Pagara) will face a good fighter.”

Exciting bell-to-bell slugger Jimrex “Executioner” Jaca (37-6-3, 21 KO’s) who some years ago gave Juan Manuel Marquez all he could handle before he got careless and was nailed with a cracking combination by the bloodied Mexican legend who won by a 9th round knockout is eager to move into the spotlight once again by winning the vacant WBO Oriental light welterweight title when clashes with another tough Mexican Jose Emilio Perea (29-2, 20KO’s).

Servania faces a must situation because Top Rank has already lined him up for a fight on the undercard of the WBC/WBA flyweight title fight between mandatory challenger Milan Melindo and Juan Francisco Estrada on July 27 in Macau.