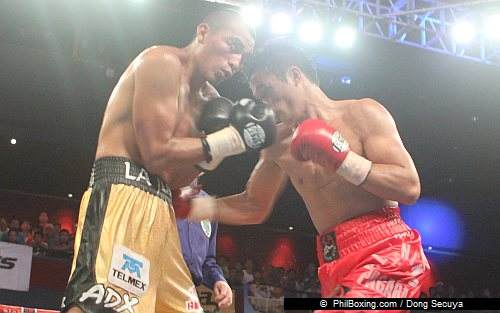 Jason Pagara successfully defended his World Boxing Organization (WBO) international light welterweight title. It was a convincing unanimous decision win over Aaron Herrera of Mexico. Pagara said it’s all up to his boss Antonio L. Aldeguer to chart his future fights. But he is always prepared for any challenge that might come along the way.

It seemed that Pagara was on his way to a knockout victory as promised during the pre-fight press conferences. He knocked the Mexican down who touched the floor with his gloves and received an eight-count from the referee Bruce McTavish. But La Joya recovered and withstood the best punches the Filipino champion could slap on him.

The Mexican challenger had his moments of dominance in the middle rounds when the ALA standout seemed to run out of steam. But the impressive final three rounds proved to be the Filipino’s selling point as he asserted his power over the visiting foe. El Niño traced his roots from Maasin City and honed up his skills in Cagayan de Oro City under the patronage of Misamis Oriental governor now CDO mayor-elect Oscar Moreno.

The WBO top contender is the next Pacquiao foe Brandon Rios. The number two contender is undefeated American Karim Mayfield and the number three is Sehiy Fedchenko of Ukraine, who once fought and lost to Marquez.

If he intends to challenge the other organizations’ titles then he has to contend with WBA and WBC champion Danny Garcia, who is also The Ring champion, or IBF champion Lamont Peterson.

The light welterweight division is overcrowded with talents. But Pagara is still young and has the great potential still waiting to be tapped. He has to train in the United States to be at par with the world class fighters of his category.

And during the post-fight interview over ABS-CBN, Pagara said “ALA knows best.” 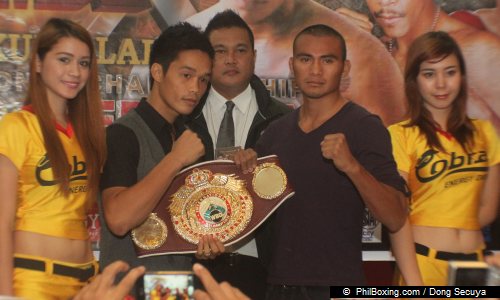 CEBU CITY – The adversaries for the 20th edition of the ‘Pinoy Pride’ series had their final round of sabre rattling today during the final press conference held at the Waterfront Cebu City Hotel. Jason “El Niño” Pagara (30-2, 19KO’s) of the ALA Gym, who will defend his WBO International light welterweight title against Mexico’s Aaron “La Hoya” Herrera (25-1, 17 KO’s) said that the Mexican challenger’s style is easy to solve.

“Simpol ra kaayo ni siya pildihon.” Pagara said when asked to comment about Herrera’s fight videos. “I will not promise anything but you will see a knockout.”

Herrera for his part said that he is 200 percent prepared. “I will beat Pagara because this is the first time that he will face a good fighter.” Trainer Edmund Villamor said that Pagara is in better shape even compared to his condiitoning during the Rosbel Montoya rematch. This will be the second time that Pagara will headline a Pinoy Pride card. They will trade punches this Saturday inside the Pacific Ballroom of the Waterfront Cebu City Hotel and Casino.

Jimrex “Executioner” Jaca (37-6-3, 21 KO’s) will go for the vacant WBO Oriental lt.welterweight title and a world ranking when he fights with Mexico’s Jose Emilio Perea (29-2, 20KO’s).

Jaca, who is known for his gallant loss against Juan Manuel Marquez, said that he is in better shape now and is only a pound over 140.

Jaca, who is trained by Franklin Albia, looks forward to the opportunity to face Marquez again.

Undefeated Genesis “Azukal” Servania (19-0, 7 KO’s) will face Isaac Junior of Indonesia (20-3-2, 8 KO’s)in a ten round non-title contest.  Servania is in a must situation because he is already penned for a fight in Macau this July. A special feature in this card will be the pro debut of Jessel Magsayo of the ALA Gym, who will face Melton Sandal of Zamboanga del Norte in a four rounder. Magsayo is a former amateur standout and caught the attention of Philboxing editor Dong Secuya, who together with this writer, watched him spar against Servania.

Magsayo, who hails from Tagbilaran City, was already spotted by this writer three years ago when he represented the BTC Boxing Club and was chosen as the Best Boxer of the Tournament during the amateur finals of the Mayor Jonas Cortes Cup in Mandaue City.

The official weigh-in for Pinoy Pride XX: Laban kung Laban will be on noontime Friday May 24 at SM Cebu Events Centre.