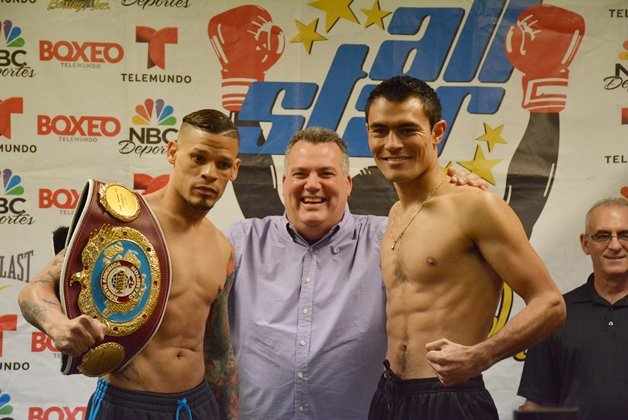 “We are very proud to present this fight,” promoter Felix ‘Tutico’ Zabala Jr. told BoxingScene.com. “Both boxers still very much want to win a world title. They could have taken a much easier path, but want to prove they still belong in contention for a world title in agreeing to this terrific battle.”

Cruz (22-4-1, 11KOs) was targeted to headline the first installment of the Telemundo spring boxing season. The timing couldn’t be worked out for the February 26 show, which is now topped by Ricardo Rodriguez in a 10-round super flyweight clash versus Miguel Cartagena in Palm Bay, Florida.

Instead, Cruz will now appear in the Tampa region for the first time in his 15-plus year career, having previously developed as a sizeable draw in the Orlando/Kissimmee region.

Cruz has won two straight since suffering back-to-back losses in a brief stretch that was believed to end his days at the top level. His aspirations of becoming the third member from the 2000 Puerto Rico Olympic boxing team to win a major belt (future Hall of Fame former champs Miguel Cotto and Ivan Calderon are the other two) were dashed in an 8th round knockout loss to Orlando Salido in their Oct. ’13 featherweight title fight.

The loss wasn’t quite as crushing as a shocking 10-round defeat at the hands of Gamalier Rodriguez in their April ’14 clash. Cruz decided to sit out for more than a year before returning last June, having since won two straight including a unanimous decision over Gabino Cota in their Telemundo-televised headliner last October in Kissimmee.

Further disheartening in his loss to Rodriguez was the fact that a victory would have led to a second title shot. Instead, Rodriguez went on to face reigning featherweight titlist Vasyl Lomachenko, suffering a one-sided 9th round stoppage on the undercard of the most-watched Pay-Per-View event in boxing history, topped by Floyd Mayweather’s points win over Manny Pacquiao.

Lomachenko’s next victim didn’t fare any better, as Koasicha (25-5, 15KOs) was brought crashing back to Earth following a 10th round stoppage in their HBO-televised title fight last November.

The loss was preceded by a four-fight win streak for the 24-year old from San Luis Postol, Mexico. His most recent victory came on Telemundo, scoring a 7th round stoppage of Guillermo Avila last July.