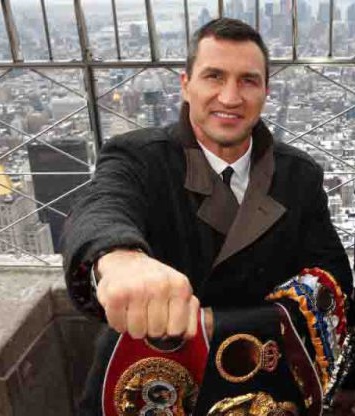 Heavyweight champion Wladimir Klitschko, one of boxing history’s most dominant big men, will make a mandatory defense against Tyson Fury, a rare opponent bigger than him, on Oct. 24 at the Esprit Arena in Dusseldorf, Germany, after their camps made a last-minute deal and avoided a purse bid Monday.

With a purse bid scheduled for noon ET at the WBA headquarters in Panama City, Panama, Klitschko’s K2 Promotions and Fury promoter Mick Hennessy, who had been negotiating for weeks, reached an agreement with four minutes to spare.

Had the fight been put up for auction — Klitschko, as champion, was entitled to 80 percent of a winning bid and Fury 20 percent — they risked losing promotional control of the bout, as representatives for British promoters Eddie Hearn and Frank Warren as well as Russian promoter Vlad Hrunov himself showed up at the purse bid intending to put in offers for a fight that surely would have garnered a winning bid of at least $15 million.

“We had constant conference calls with each other and the lawyers, and then four minutes before the deadline we reached an agreement,” Klitschko manager Bernd Boente told ESPN.com. “I think a good deal is one where both sides are happy, and both sides are happy with this deal. Mick Hennessy and Tyson Fury are happy and Wladimir and our side are also happy.”

Boente was in Germany but said he was in constant contact with Hennessy as well as Tom Loeffler, managing director of Klitschko’s K2 Promotions, who was in Panama, as they finalized the agreement.

Klitschko will be returning to defend the title at Esprit Arena for the third time. In 2012, he pummeled former cruiserweight champion Jean Marc Mormeck in a fourth-round knockout, and in 2010 he dominated Eddie Chambers before scoring a crushing knockout with five seconds left in the 12th and final round.

Both fights drew massive crowds of more than 50,000 to the indoor soccer stadium, and this is a far more anticipated fight than either of those.

Terms of the Klitschko-Fury agreement were not disclosed, but the showdown looms as one of the most significant heavyweight title bouts in recent years given Klitschko’s enormous popularity in Germany as well as Fury’s following in England. Also, it is a bout that fans have looked forward to for the past few years.

“It is definitely a very big fight,” Boente said. “Tyson Fury is a top challenger without any doubt. It’s a tough fight, no doubt.”

The 6-foot-6, 245-pound Klitschko (64-3, 54 KOs), 39, who is from Ukraine and lives in South Florida, will be making the 19th title defense during his nine-year, second reign — second-longest in heavyweight history behind only Joe Louis, who held the title for more than 11 years.

Klitschko’s 18 consecutive successful title defenses are third most in heavyweight history behind Louis’ all-time record of 25 and Larry Holmes’ 20. Klitschko is coming off a one-sided decision victory against then-undefeated Bryant Jennings on April 25 at Madison Square Garden in New York.

With the win against Jennings, Klitschko moved to 25-2 overall in world title bouts. When he faces Fury, it will be the 28th world heavyweight title bout Klitschko will be participating in, which will break the all-time record of 27 that he and Louis share.

England’s 6-foot-9, 260-pound Fury, 26, who will be the sixth undefeated opponent Klitschko will be facing in his last seven title defenses, is known for his outlandish trash talk, which undoubtedly will help sell the fight.

But Fury (24-0, 18 KOs) has also earned his position as Klitschko’s mandatory challenger. He scored a 10th-round knockout of contender Dereck Chisora — his second win against him — in their November title elimination bout. Fury knocked out Christian Hammer in the eighth round on Feb. 28 to stay busy before the title shot.

“I promise I won’t do a David Haye and s— myself. I’ll KO this super champ. I don’t talk unless I can back it up,” said Fury, taking a shot at countryman David Haye, who trash-talked Klitschko relentlessly and then did virtually nothing in a one-sided decision loss he blamed on a sore little toe when they met in a 2011 title unification bout.

Boente said the bout will be televised on HBO in the United States and RTL in Germany — networks that have contracts with Klitschko. He said the television outlet in the United Kingdom was not settled. He said talks are ongoing with ITV, Sky Sports and BT.

“We are happy we found an agreement in the end,” Boente said. “There are always certain points and certain issues you have to deal with but the good thing is we reached an agreement and that’s what counts. Maybe it was good we had the pressure of the purse bid to reach an agreement.

“Mick Hennessy and myself both said why is it necessary to give other promoters a chance to outbid us and promote the fight when we could have a nice cooperation? I am confident we will work together very well. We all want this to be a megaevent. The fight inside the ring could be absolutely thrilling and we will make sure that there will be a sold-out arena and television viewers around the world for this great fight.”