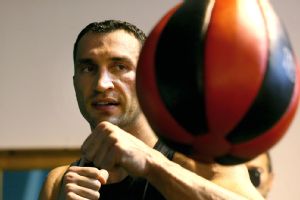 Heavyweight champion Wladimir Klitschko has suffered a torn left biceps, forcing him on Monday to postpone his mandatory defense against Kubrat Pulev that was scheduled for Sept. 6 at the O2 World arena in Hamburg, Germany.

Klitschko suffered the injury on Friday during a sparring session.

“He had problems on Friday, and he first thought it’s a minor thing, but he went to the hospital near the camp [in Austria], and there they detected this torn muscle,” Bernd Boente, Klitschko’s manager, told ESPN.com. “He was in top shape and he had perfect sparring partners. He did a long preparation and is sorry to have to postpone the fight.”

Said Klitschko in a statement: “I am very disappointed that the fight cannot take place as planned. I am in absolute top form and had a great training camp. Of course, I’m sorry for the fans, but also for my opponent Kubrat Pulev, who was certainly training as intensely as I do.”

Dr. Robert Siorpaes diagnosed the injury and recommended that Klitschko suspend training for about four weeks.

Boente said the fight will be rescheduled for November and likely still take place at the O2 World, which was already sold out — around 15,000 tickets — for the Sept. 6 fight.

“We hope to reschedule the bout in the same arena in mid-November, probably Nov. 15,” Boente said. “But that is something we have to discuss with the arena and RTL [the German television network that has a contract to carry Klitschko’s fights]. We also have to talk to the IBF because this fight is a mandatory.

“Of course, we are all disappointed, but these things can happen during the preparation.”

Klitschko (62-3, 53 KOs), 38, of Ukraine, is bidding for a 17th title defense. His 16 successful defenses during his second title reign are the third-most in heavyweight history behind those of only Joe Louis (25) and Larry Holmes (20), and his eight-year-plus reign is second all time to Louis’ record 11 years, 8 months, 8 days.

Klitschko, a 1996 Olympic gold medalist, moved to 23-2 overall in world title fights with a one-sided, fifth-round knockout of Australia’s Alex Leapai, a mandatory challenger, on April 26 in Oberhausen, Germany.

Pulev (20-0, 11 KOs), 33, of Bulgaria, a former European champion, earned his mandatory challenger status in August 2013 with a unanimous decision against American Tony Thompson, who had twice been knocked out by Klitschko in mandatory title fights.

Since becoming the mandatory challenger, Pulev, known as “The Cobra,” has fought twice. He scored a fourth-round knockout of Joey Abell, who knocked him down, in December, followed by a third-round knockout of Ivica Perkovic on April 5.