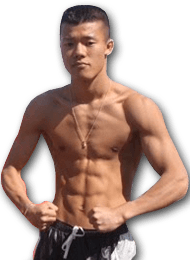 Born on July 12, 1991 in Osaka, Japan.  He is an undefeated Japanese Mexican boxer and the youngest brother of the two world champions, Koki and Daiki.

Tomoki Kameda, created history for his clan and Japan when he beat, WBO Bantamweight Champion Paulus Ambunda in his first defense. His clan were registered officially in The Guinness Books of Records because they are the first trio of brothers world-wide champions in the history of boxing.

Kameda in his amateur career he was training for the Beijing Olympics with a record of 35-1-1 in Japan, but he was to young to participate in the Olympics, instead of waiting he choose to turn pro.  He was champion of seven regional and minor titles.