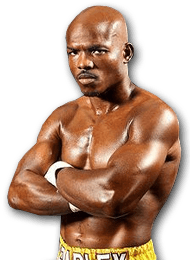 Timothy Bradley began boxing at age 10. As an amateur, Bradley had a great record, including over 140 amateur bouts. He won titles at the PAL National Tournament, and became the Under 19 National Tournament Champion and the Jr. Golden Gloves Champion.

Bradley was also a two-time National Champion and before turning professional was ranked 3rd in the nation. Bradley started his professional career in August of 2004 against Francisco Martinez in Corona, California with a TKO in the 2nd round. His won his first title in 2005 when he defeated Francisco Rincon by unanimous decision and claimed the vacant WBC Youth Welterweight Title.

Champion. In January 2011, Bradley had his most notable win when he defeated then undefeated Jr. Welterweight champ Devon Alexander. When asked why he is known as “Desert Storm”, Bradley explains he offers his opponents and his fans an all-out war each time he steps in the ring and this was a great way to honor all the service men and women that have successfully defended our country.