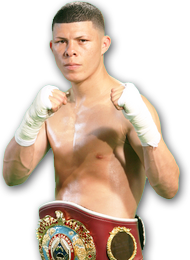 On December 22, 2001, Martinez began his professional career, beating fellow Puerto Rican Wilfredo Ramos with a fourth round knockout on the undercard of a bill headed by Irving Garcia in Manatí, Puerto Rico. After defeating Ricky Piedra by knockout, he won his first decision against Israel Galarza. During the next year, Martínez defeated Richard Boyd, Adisone Sengaroun and Joe Johnson by knockout and Israel Coraliz by unanimous decision, before scoring the first draw of his career against Jose Leonardo Cruz. After six months of inactivity, he returned to action on April 23, 2004, defeating Celestino Rodriguez by technical knockout. Martínez fought once more in 2004, defeating Johnny Walker by unanimous decision. On January 27, 2005, he fought Mario Lacey, defeating him by knockout after scoring three knockdowns in the fourth round. After defeating Derrick Moon by unanimous decision, Martínez fought to ten rounds for the first time in his career, defeating Jose Luis Soto Karass by unanimous decision. This fight was followed by eleven months of inactivity, when he returned to action by defeating Wilfredo Vargas by technical knockout in three rounds.

On February 23, 2008, he defended the first of these titles against Jose Anibal Cruz, winning by technical knockout in the third round. This was followed by a preparatory fight against Cristian Favela in the lightweight division, which he won by unanimous decision, with scores of 97-93, 98-92 and 99-91. On August 30, 2008, Martínez defended the NABO super featherweight title against Santos Benavides, winning the contest by technical knockout in the sixth round. He entered this fight ranked third in the WBO and expected to receive a championship opportunity against then-champion Alex Arthur if he won. On September 9, 2008, Nicky Cook defeated Arthur and inherited Martínez as his first contender. A fight between both pugilists was scheduled for March 14, 2009, as part of a card organized in Manchester, England. Early in the fight, Cook began his offensive by throwing jabs. Martínez responded by approaching his opponent to fight inside. Both connected solid body punches in the first two rounds. Cook closed the second stanza by injuring Martínez with a left hook, which he followed with a combination before the bell. During the third, they continued exchanging body punches, displaying tentative behavior throughout the period. In the fourth round, Martínez scored a knockdown, which was quickly followed by a hook that left Cook partially unconscious. The referee intervened immediately, awarding Martínez a technical knockout victory and his first world championship. In his first defense, Martínez competed against Feider Viloria. The first stages of the fight were slow, being used as study rounds by both pugilists. In the second round, Martínez began pursuing the offensive, forcing Viloria to employ a defensive strategy. This continued during the following chapter, when a previous injury re-opened under the challenger’s right eye. In the fifth round, both boxers traded combinations, with Martínez scoring the best punches. Viloria countered by employing multiple combinations during the following chapter, winning the round. Consequently, Martínez was more aggressive during the latter part of the fight. In the ninth round, he scored a combination that left Viloria unconscious, winning the contest by knockout.

On May 29, 2010, Martínez made his second defense after eight months of inactivity. His opponent was Gonzalo Munguía of Nicaragua. The contest opened with Gonzalo Munguía, who was physically stronger pursuing direct exchanges, while Martínez employed an uncommon strategy of technical sidestepping and counter attacks. During the second, Munguía employed his offensive to the body, but received a left hook that staggered him to close the round. The following round opened with both boxers exchanging, Martínez was able to gain control after thirty seconds. Munguía lowered his offensive output in the fourth round leaving openings in his defense. Martínez was able to exploit this, scoring a knockdown. Munguía was unable to stand up before the referee’s protective count concluded and the contest was stopped by knockout.

Lost his title in a unanimuos decision against Ricky Burns on September 4, 2012 at the Kelvin Hall, Glasgow, Scotland.