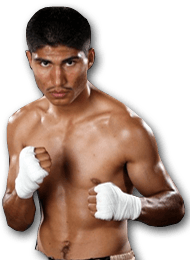 Twitter: @TEAMMIKEYGARCIA
Facebook: FACEBOOK.COM/TOPRANKMIKEYGARCIA
World championship fights: 1-0, 0 KOs…
WBO featherweight world champion…
Former NABF featherweight champion, two successful defenses…
Former NABO featherweight champion, one successful defense…
2005 National PAL Championships (amateur), 132 pounds – Gold Medalist…
2004 National Junior Golden Gloves Championships (amateur), 132 pounds, Cadet Division – Gold Medalist…
At the age of 25, Mikey is a six-year pro. The WBO featherweight world champion, he comes from a strong family boxing tradition – he is the younger brother, by almost 13 years, of former IBF junior lightweight world champion Robert Garcia, who is also his co-manager and co-trainer. Their father and Mikey’s other co-trainer, Eduardo Garcia, was the long-time trainer of retired former IBF and WBA 154-pound world champion Fernando Vargas.
Mature beyond his years, Mikey is considered by many observers to be one of boxing’s top young talents at any weight – he has stayed active in the ring and given sensational performances.
He won the WBO world title with an eight-round technical decision against defending champion Orlando Salido in his last fight on January 19.
After the fight, Dan Rafael wrote on ESPN.com [excerpts]: Most folks figured this fight would be a highly competitive and exciting fight – even though the younger, quicker, sharper Garcia was the favorite to beat Salido. But Garcia was thoroughly dominant.
This was an easy fight to score as Garcia won at least seven of the eight rounds, with a few people giving Salido one round. Garcia was not just winning the rounds, he was doing it easily. Garcia scored four knockdowns in the fight to open a massive lead. He floored Salido twice in the first round. He went down again in the third round from an uppercut and then for the fourth time early in the fourth round from a left hand. Garcia was doing as he pleased and it was impressive that Salido, whose face was bruised and swelling, was able to make it through the eighth round.
But just before the end of the eight round, he crashed his head directly into Garcia’s nose and broke it badly. Garcia was having trouble breathing and his nose was obviously crooked. The ringside doctor examined the nose after the eighth round and told referee Benjy Esteves that Garcia could not continue, and Esteves stopped the fight and sent it to the scorecards for a technical decision.
Garcia, who was masterful in the best performance of his career, was not happy to have the fight end like that. Nonetheless, Garcia fulfilled the expectation that he would win a title when he turned pro in 2006.
For Garcia, this could be the start of a lengthy title reign. [End Rafael item]
Mikey said, “My style is very technical. I’m a counterpuncher. I don’t consider myself to be an aggressive brawler or pressure fighter. I’m very calm and technical in the ring – I fight very smart. I’m not going in for the kill every time. If it happens that I hurt my opponent, then I’ll try to finish him – if I drop my opponent, I’ll try to put him out. But that’s not the main thing that I do. I don’t go out there trying to brawl with anybody. I just try to pick their weak spots and work the best.
“I’m naturally righthanded, but I change to southpaw several times during my fights, just for a few rounds depending on my opponent.
“I’m always training. After my fights, I’m always back in the gym in the next few days. We’re always going to be prepared for any fight, any opponent. We’re always going to be in top shape.”
Mikey was an amateur standout and had a win against Danny Garcia, who currently holds the WBC-WBA super lightweight world titles.
– See more at: http://www.toprank.com/fighters/miguel-garcia#sthash.Sb097fWd.dpuf