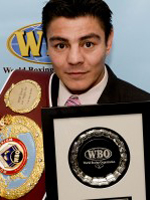 Jorge won the WBO junior featherweight world title in his last fight on May 7 with a 12th round TKO win against defending champion Wilfredo Vazquez Jr.

After the fight, Dan Rafael wrote on ESPN.com [excerpts]: This was an intriguing fight when it was made and turned out even better than we could have hoped for as Arce pulled the mild upset over Vazquez, the son of Wilfredo Vazquez Sr., the former three-division titleholder and one of Puerto Rico’s best all-time fighters. Arce had held titles at junior flyweight and junior bantamweight (as well as an interim flyweight title), but he has a lot of mileage on him and has been in tons of hard fights. But Vazquez, who was making his third title defense, is still a bit inexperienced and had a lot of trouble in the action-packed fight.

Vazquez was in control early. He knocked Arce down with a solid left hook to the jaw just as the fourth round was coming to an end. However, Vazquez could not follow up in the fifth round as Arce, who was cut over his left eye, rallied to storm back. He badly hurt Vazquez in the 11th round, and it seemed like only a matter of time.

Vazquez was backpedaling in the 12th, and Arce was walking him down. When he pinned him against the ropes, Arce rocked him repeatedly. Referee Joe Cortez let the pounding go on too long. There was no point to allowing it continue because Vazquez was basically out on his feet. Finally, Vazquez’s corner entered the ring, forcing Cortez to finally call it off 55 seconds into the round.

Congrats to Arce, one of boxing’s most fan-friendly warriors. Tremendous performance from the “Lollipop Cowboy.” [End Rafael item]

Jorge said, “There is a triple motivation to defend my title. First, the fight against Nonggayi is a big fight on a big fight card. Second, I want to avenge my brother ‘Panchito,’ who lost to the South African. And third, I want my own revenge against him because he beat me on a bad night, and on September 24 he will pay dearly those two victories over the Arces.”

Outside of the ring, Jorge has a very engaging personality and charisma, confidence, and energy to spare. Inside the ring, he has an aggressive style, skills and power, and always makes exciting fights.

He became a crossover star in Mexico a few years ago after appearing on the reality TV shows “Big Brother V.I.P.” and “Dancing for a Dream.” He also recently completed another reality TV show, “El Desafio.” [The Challenge]

He enters the ring wearing a black cowboy hat with a lollipop in his mouth. He said through an interpreter, “When I started boxing, I would always get real nervous before fights. They said the lollipop would help sooth my nerves. So, ever since I started, I always had the lollipop. I just started wearing the hat the last few years. The people where I’m from in Sinaloa, everybody wears those hats. It identifies me, where I come from. I also wear a rosary that I put on myself. It’s a gold one that my mother gave me.”

Regarding his nickname, he said, “I was a very hyperactive kid. I was always getting in trouble somewhere here and there, you know, pulling girls’ hair, making everybody cry, hitting them. They were saying, ‘Man, this kid is a real menace.’ So, Travieso means ‘menace.’ ”

Key Fights – 2011 – WON WBO Jr. Featherweight WORLD TITLE – in his last fight on 5-7-11 in Las Vegas, NV, he TKO’d previously undefeated defending champion Wilfredo Vazquez Jr. (20-0-1): the fight was co-featured with the Manny Pacquiao-Shane Mosley main event – it was fast-paced and exciting, and stole the show; Jorge started fast – he swept the 1st and 2nd rounds and won the 3rd round on two scorecards, although he was cut over his left eye by a clash of heads; Vazquez rallied and scored a knockdown with a left hook in the 4th, but Jorge won the 5th and 6th rounds on two scorecards; the momentum shifted back and forth in the second half of the fight – Vazquez won the 7th on two scorecards, Jorge swept the 8th round, then Vazquez won the 9th on two scorecards and swept the 10th round; but Jorge staggered Vazquez in the 11th and swept the round; he rocked Vazquez with a series of punches in the 12th round – Vazquez’ corner entered the ring to signal the end, and the referee stopped the fight at 0:55; after 11 rounds, the fight was scored 107-102 Arce, 104-104, 104-10

After Capturing the title, Arce made one successful defense against Simphiwe Nongqayi by 4th round TKO. Arce later decided to go back down in weight to the Bantamweight division, for the opportunity to capture the vacant WBO bantamweight title and become the first Mexican boxer in history to capture five titles in different weight classes. In a hard fought match against Angky Angkota, Arce was able to come out with a unanimous decision vistory, and capture the title in a fifth different division.