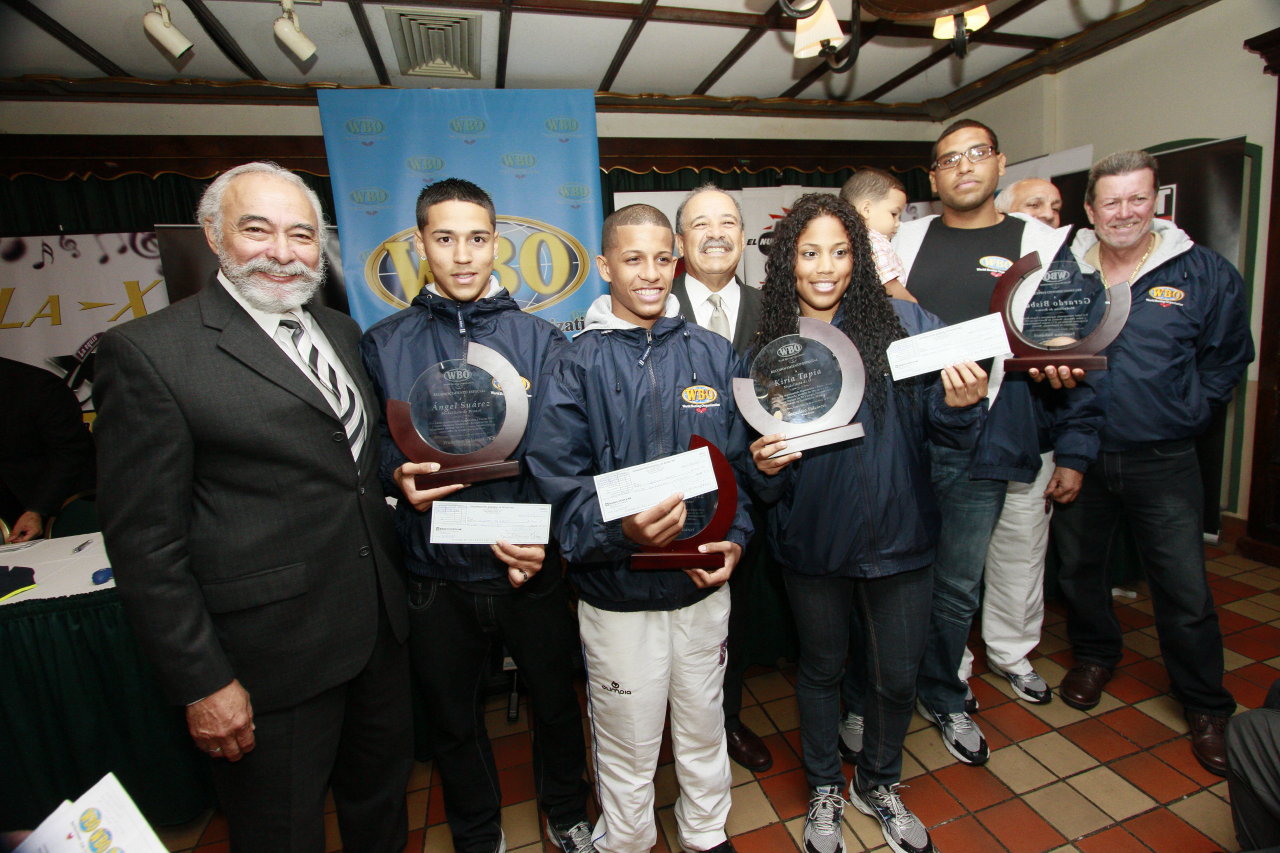 SAN JUAN, Puerto Rico- The World Boxing Organization (WBO), firm in its commitment with the puerto rican youth, held a ceremony to honor the four puerto rican boxing medalists the XVI Pan-American Games of Guadalajara, Mexico, that concluded this weekend.  The boxers that obtained medals in the Pan-American Games were the young Kiria Tapia (gold in the 60 kilograms), Jantony Ortiz (bronze in the 49 kilograms) Angel Suarez (bronze in the 60 kilograms) and Gerardo Bisbal (bronze in the more than 91 kilograms). Along with them were their coaches José “Chicky” Laureano and Víctor “Gray” Ortiz, as well as the president of the Puerto Rican Federation of Amateur Boxing (FPBA), José Luis Vellón.  Also, the president of the WBO, Francisco “Paco” Valcárcel and the president founder of the WBO, Luis Batista Salas.

“The WBO has always been involved with today’s youth, and as part of our program ‘Kids Drug Free’, we want to recognize these four young athletes that gave their all in order to win these medals in the Pan-American Games”, stated WBO President Francisco “Paco” Valcárcel in the ceremony which was held at El Zipperle Restaurant.  “Above all, the young woman Kiria Tapia, who won the gold medal  in her first ever Pan American Games.  We have to continue supporting and helping these young boxers so that they continue along the right path”.

Tapia’s journey to the gold began by defeating the American Qanitta Underwood in her first bout, finishing tied at 17-17 and winning by blows landed 48-41, later she defeated Argentina’s Adela Banks and in the gold medal bout she defeated Mexican Erika Cross by a score of 22-12.  “This is something huge, to win this gold medal.  It was hard work, but we achieved our goal.  I feel very proud of what I achieved and we thank to WBO for this recognition they have done for us”, Tapia said, who is from the residencial area of Monte Hatillo.

In turn, Ortiz won its first fight against the Argentine Junior Zárate by a score of 10-5, later defeated the Panamanian Gilberto Pedroza 17-6 , but then lost against the Cuban Yosbany Veitía 14-9.  “I am the youngest of the group, “the baby” as they call me, and I feel very emotional by this bronze medal.  I want to thank all the team, the coaches, the Puerto Rico Boxing Federation and the WBO for all the help they have given us”, said the seventeen year old Ortiz.

Meanwhile, Suarez won his first bout against the Colombian Cesar Villarraga by a score of 19-16, then defeated Ecuador’s Julio Cortez 26-13, but later was defeated by the Brazilian Robson Da Conceicao by a score of 27-8.  “We worked hard to win this medal and we did achieved it.  The team was always working as a unit, and thankfully we won these medals for Puerto Rico”, said Suarez, of Guaynabo.

The veteran of the group, Bisbal, won his first fight 20-11 against Clayton Laurent but lost by knockout against Ecuador’s Ytalo Perea.  “I am the veteran, the old one of the group, and I feel proud of everything that we achieved.  Thanks to all people that supported us along this journey”, said Bisbal, of Salinas. On behalf of the WBO, the boxers recieved a trophy of recognition for their great achievements, as well as a monetary compensation. Tapia was given $1.000, while Ortiz, Suarez and Bisbal received $500 each.

“It is not only about honoring and congratulating them, there is also the economic part and the WBO has always helped out (money-wise) these young athletes that, like always, represent Puerto Rico in the best way possible. Boxing has always represented Puerto Rico at the highest levels”, added Valcárcel.  The WBO works along with the Puerto Rico Federation of Amateur Boxing (FPBA), contributing different materials and articles of training for the boxers.

“We want to thank, as usual, the WBO for all the aid that they have offered us because we have been able to achieve many things thanks to them”, expressed Vellón.