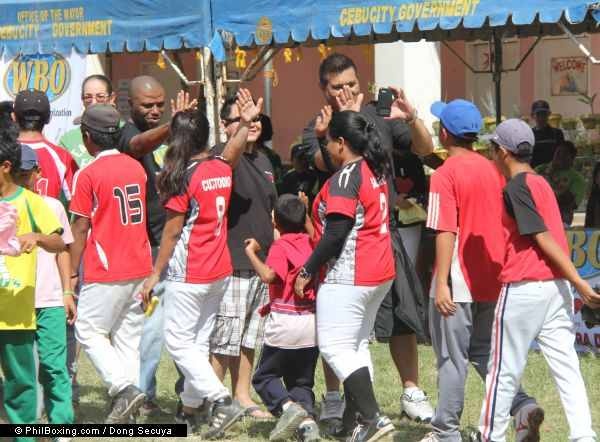 CEBU CITY — In a commendable side activity for tonight’s huge WBO world title fight between the Philippines’ Donnie ‘Ahas’ Nietes vs Mexico’s Moises Fuentes at the Waterfront Hotel here, WBO, headed by its vice president for Asia-Pacific region Leon Panoncillo Jr and some of the visiting WBO officials, went to the Labangon Elementary School this morning to open up and sponsor a Kids Baseball and Softball tournaments. WBO has been known to promote and help kids all over the world to fight against drugs.

The local kids baseball and girls softball teams are being organized by hardworking Mexican-American Mike Angel Lopez who has been residing in Cebu for several years. “This tournament is in preparation for the teams to compete in the CVIRAA,” Lopez said, referring to the annual regional school sports competition. “And we thank the WBO for supporting us by giving the prizes and trophies for this tournament,” Lopez added.

Visibly elated, Panoncillo and the visiting WBO judges Adelaide Byrd, Pat Russell and Danrex Tapdasan were all smiles as they exchange high-fives with the participants. “This is good! this is good!” Panoncillo exclaimed.
http://philboxing.com/news/story-80946.html