In This Corner, a Much-Needed Distraction 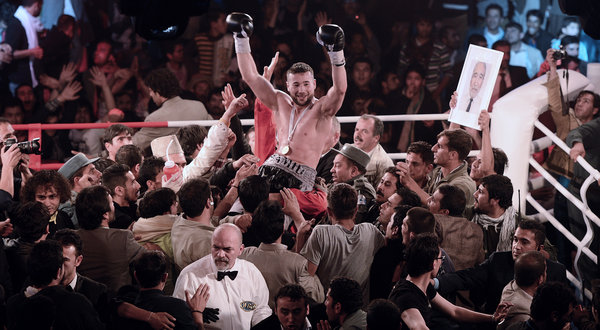 Hamid Rahimi, a German of Afghan descent, celebrated his victory. He was the crowd favorite.

KABUL, Afghanistan — Afghans love a good fight. Dog fights, ram fights, partridge fights — if two combatants square off here, there is sure to be a crowd cheering them on.

So when a German promoter this week brought the spectacle of professional boxing to Kabul — an international title fight with an Afghan contender, no less — the only real question for many Afghans was what took so long and, of course, how to get tickets.

The Thrilla in Manila it was not. Billed as the Fight 4 Peace, Tuesday night’s match played out more like the Squabble in Kabul.

The championship at stake was the unclaimed intercontinental middleweight belt of the World Boxing Organization, a title that is about as second-tier as it gets. The contenders — Hamid Rahimi, 29, a German of Afghan descent, and Said Mbelwa, 23, of Tanzania — were recognizable names nowhere beyond Afghanistan. To keep the crowd’s attention, there was also a praying mullah, a soccer ball juggler, a pair of Afghan pop stars and two slender men who pantomimed a Thai kickboxing match. Despite the fact that Mr. Rahimi was the clear crowd favorite, many onlookers acknowledged that his eventual victory through a technical knockout was dubious.

But they loved it anyway. Thousands showed up to see the match, and riot police officers were needed to keep those without tickets from storming the venue. Tens of thousands or more watched it on television. Afterward, young men cruised the streets, hanging out of car windows and chanting “Ha-Mid! Ha-Mid! Ha-Mid!”

By Wednesday morning, the match was the biggest news in the capital. Ahmad Noor, 42, a construction company manager, quipped that Mr. Rahimi’s fame now equaled that of President Hamid Karzai and Mullah Muhammad Omar, the Taliban leader. (Mr. Omar surely would have been displeased with the comparison, since he banned boxing when the Taliban ruled Afghanistan.)

Adel, 30, a street-side snack vendor who uses only a single name, said Mr. Rahimi’s victory was better than Id al-Adha, a major Islamic holiday that ended a few days ago. In American terms, that would be like saying it was better than Christmas.

If anything, the late summer and autumn of 2012 may well be remembered by Kabulis as the time when Western-style professional sports finally came to their city. The boxing match, as well as a string of soccer games, gave many a good reason to forget, at least for a few hours, the Taliban, the foreigners, the warlords and every other unwelcome group or unsavory character that has inflicted pain and suffering here.

Afghanistan has long had an active amateur sports scene, and Afghan athletes have competed internationally in the last few years. But many of those efforts — a women’s boxing team, for instance — often seemed to be at least partly geared toward Westerners eager to see how their countries’ efforts were changing Afghanistan.

This season’s big sports events, in contrast, were aimed squarely at Afghans themselves. Before the Fight 4 Peace came the Afghan Premier League, a well-organized professional soccer league that concluded its inaugural season a few weeks ago.

Both the boxing match and the soccer league had the trappings of big-time American or European sports events, with corporate sponsorships and live television broadcasts. Each was easily as big a story to Afghans as the events here that grabbed the Western news media’s attention, like the end of the American surge, which played out during the Premier League season.

“Why do I have to think about the Taliban or Obama when I watch a game? What do you think about?” snapped Muhammad Ishaq Geran at a Premier League match in late September when asked a few too many questions about watching soccer under Taliban rule.

Mr. Geran, 48, an administrator at the Ministry of Public Health, said the Taliban had nearly ruined soccer for him. Back when they were in power, games were often turned into propaganda spectacles with executions and amputations at half time.

He hated it. But with television, music, dancing and a host of other entertainment options banned, the soccer games “were the only entertainment we had,” he said. So he closed his eyes during the executions.

Now that Afghanistan had the Premier League, he could finally find the same escape in sports that fans do all over the world, he said. The cheap tickets — 30 afghanis, or $0.60, a seat — and live television broadcasts helped, too.

The Squabble in Kabul provided the same escape but at a steeper price. Tickets were 3,000 afghanis, about $60, and scalpers were selling them for as much as 12,000 afghanis, or nearly $240.

The ring was set up inside what is known as the loya jirga tent, a large concrete conference hall originally built for Afghan leaders to meet and decide matters of national importance, like whether to sign a strategic partnership deal with the United States.

No one was debating international affairs on Tuesday night. First came the mullah, who recited a prayer that he said the Prophet Muhammad spoke before conquering Mecca. Then came blaring pop music of a decidedly un-Islamic bent — “give me what you got in store, girl, I’m begging for more” — and the other opening acts.

The roughly 3,000 men at the tent were riled up by the time the fight got under way. Mr. Mbwela, who had to know he did not have a fan in the house, quickly embraced the role of the villain, theatrically pumping his fists at the crowd between rounds.

The fighters each got in their punches until early in the seventh round when Mr. Rahimi hit Mr. Mbwela in the shoulder. The Tanzanian retreated to his corner, gripping the shoulder with his glove. The fight was over.

The crowd went wild at the announcement Mr. Rahimi had won. Even Mr. Mbwela appeared to get caught up in the moment. He grabbed the new champion, who is now marketing an energy drink here, and lifted him into the air — and spawned Afghanistan’s latest conspiracy theory: that of the rigged boxing match.

“I think it was fixed,” said Arash, 27, a money exchanger who uses only a single name. “His rival grabbed him and raised him even though he was defeated.”